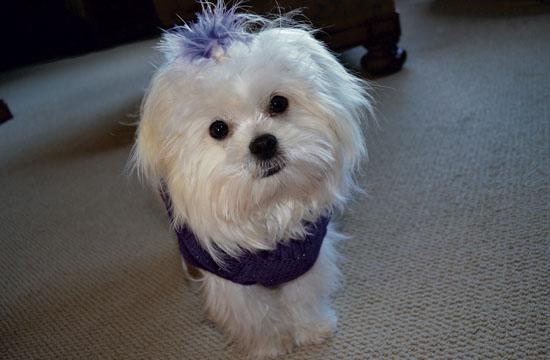 Recently, I had to move out of my house for a week. We were getting our hardwood floors redone, and the refinishers highly recommended we leave the house while the work was being executed.

My husband took this as an opportunity to fly to Florida see his aged, ailing father of 88.  My rescue dog Zoey (a Maltese) and I were suddenly by ourselves! We planned a staycation in Santa Monica, determined to take advantage of all that the city by the sea had to offer.

Our base was to be the Fairmont Miramar Hotel. I think I get the better deal, between my husband and I. Zoey and I checked in on a Friday night. We were in the newly refurbished wing of the hotel. Nice. I looked out the window and discovered an ocean and pool view. Even nicer! I started to unpack my suitcase.

On the bureau, I found a lovely surprise. There was a fruit and cheese plate from my friend who’s the manager of the hotel, and a dog bed, dog bowls, and some bones for my Zoey! We were elated. I could get used to this staycation, in the form of an extended-staycation!

After unpacking, we walked from the hotel to Whole Foods to get Zoey her dog food. It was a beautiful, balmy night.

Once back to the Miramar, we stayed in for the evening, Zoey eating her dog food out of her new bowl, and me ordering room service – a salad and a glass of wine. We snuggled on the soft, comfortable beds – Zoey on her new bed and me in mine. I think we were fast asleep by 9 pm.

The next morning, Zoey and I headed out the door to discover Santa Monica on foot. We started out at Palisades Park, right across the street from the hotel. It’s a beautiful, historical locale, overlooking the Pacific Ocean. I brought my camera and started clicking away. Zoey was getting acquainted with all the neighborhood dogs. It was great fun. We continued to the farmer’s market. There I brought some sweet, juicy peaches, strawberries, and a muffin. We moved on, once I realized that no dogs were allowed in the confines. Oops!

We walked over to a coffee shop, ordered a cup and a bowl of water for Zoey, and sat for an hour or so, people watching. Zoey was having fun saying hello to everyone. It felt great, like home. Such a small-town feeling. Loved it.

At the pier, we sat on the wooden steps, over- looking the ocean. There was a soft breeze blowing. Zoey sat on my lap, and we watched the seagulls, fishermen, exercisers and tourists, all blending together as one. We reluctantly decided to get up and head back to the hotel. As we were making our way back, I stopped to check out another favorite of mine, the Pacific Pier Ferris Wheel. I asked if I could take my dog on the ride, but as I expected they wouldn’t allow it.

We took our time walking back to the hotel, looking at stuff one rarely sees when racing around from one meeting to another in a car. Once back to the room, we took a long, leisurely nap and got ready for our next outing, an early dinner with a friend at Blue Plate Taco. I was running a little late from taking too long of a nap. We rushed from our room to the valet area, asking how long of a walk it was to the restaurant, explaining we might be late.

Again, an unexpected surprise. The hotel had complimentary car service! Zoey and I jumped into the passenger seat of the black Cadillac Esplanade and were whisked to the restaurant in less than five minutes. How fun!

The dinner of lobster tacos with truffle oil and a frozen margarita was the perfect meal for me. Zoey was quite happy sitting outside with her bowl of water and some Whole Foods dog food. I even gave her a small taste of lobster. She gobbled it up.

Zoey, you’re a long way from the high-kill shelter in Downey where they put you when they found you wandering as a sickly, stray puppy! I am so glad I found you and gave you your forever home. Thank you Santa Monica, for being part of her world!

Hot Flash Universe is the go-to source for women over 40 looking for insight into the hottest, most current trends, products, and issues.Topics are approached with candor, intellect, and a healthy dose of humor. We search for the best Santa Monica has to offer for women of any age to be sexy, smart, and savvy.