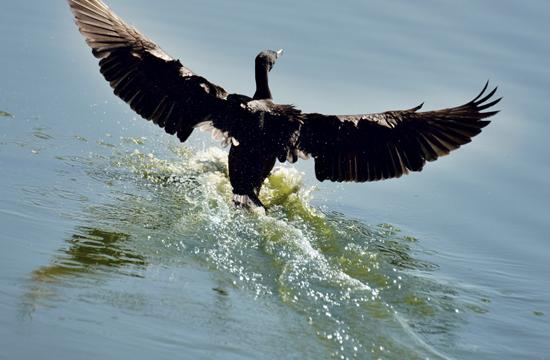 Santa Monica summer at the beach: Surfers, children splashing in the waves, junior lifeguards in training, long distance ocean swimmers in the surf, and runners on the beach paths.

Beach walks at sunrise and sunset. Dolphin sightings, sandpipers poking in the sand for their breakfast, pelicans flying low across the water and then diving for fish, and the choreographed dance of the Black Cormorant.

The glory of summer in Santa Monica makes it even harder to get one’s mind around the fact that the local election season is now open.

The early start is an indicator of the controversies swirling around town. Key issues will be the scale and urban character of new development and the existing and continuing increase in traffic.

Look to the defeat of the Hines Project. Add to that the ongoing opposition to the height and scale and character of the proposed development at the Fairmont Miramar Hotel and to other developments in the application queue. Development is the main argument.

The Hines defeat is particularly telling. A major new community organization in town, Residocracy.org, flexed considerable muscle and brought about the defeat of the Hines project. SMCLC (Santa Monica Coalition for a Livable City) had previously opposed the Hines project and was ready with a lawsuit.

In a show of unanimity all the Santa Monica neighborhood organizations, OPA, NOMA, PNA, MidCity Neighbors, NE Neighbors, Wilmont, and Friends of Sunset Park joined together in asking the City Council to reject the Hines project.

The organization that brought Rent Control to Santa Monica in the late 1970’s SMRR (Santa Monicans for Renters Rights) publicly opposed the Hines project and key SMRR leaders spoke against the project at the Council hearing.

Is the split in SMRR endorsed Council Members an indicator of conflict at the upcoming Aug. 3, 2014 SMRR Convention? Does the division of SMRR votes on the Council reflect a division within SMRR? How will it effect SMRR endorsements? What does it mean for the election and the next Council?

Editor’s Note: Only campaign links provided from the City Clerk’s are listed above.

Election day, Nov. 4, is almost four months away but campaigning is full on.

Current Mayor Pam O’Connor, a five-time SMRR-endorsed candidate is not expected to receive another SMRR endorsement nor the campaign and financial support that goes with the SMRR endorsement.

The community organization SMCLC (Santa Monica Coalition for a Livable City) moved quickly to endorse Kevin McKeown, Sue Himmelrich, and Richard McKinnon, saying: “Santa Monica faces a historic election…when residents will have a chance to fundamentally change the current council, from one where the majority largely rubber stamps a steady onslaught of high-density, traffic-clogging overdevelopment – to one that will act for residents, not developers. The scale, character, and livability of our City is at stake.”

He said, “Santa Monica is a great city. However the community is fractured at the moment and residents have lost trust in their elected officials. The whole world wants to come to Santa Monica, to our low-scale city of beaches and parks and sunlight and trees. I understand that there will be development but I want it to be sympathetic to the City.”

Sue Himmelrich invited supporters to her house over the weekend for speeches and tacos from a taco truck. (An ink stamp on the back of your hand from the campaign was what you showed at the taco truck). Kevin McKeown and Tony Vazquez, current SMRR Council Members, and Denny Zane, an early SMRR leader and former Council Member, were there to support Himmelrich. Zane told the group of about 70 people, “We need to be allies for a community that has a human scale and we do not need to be a world class destination, we need to be a city of residents.”

Himmelrich, an attorney with the Western Center on Law and Poverty, promised “a transparent Santa Monica government.” She called the Hines project “just wrong” and said that she had given both money and legal advice to support the referendum that defeated the project. “People are above corporations and our City is the right scale now and we need to keep it that way.”

Michael Feinstein’s community meet and greet this week was at the destination surf shop, Zuma Jay’s on Main Street. Former Los Angeles City Council Member Bill Rosendahl introduced Feinstein saying, “He has a passion for the issues which are important to all of us. The bay, the ocean, shutting down the airport, and making good development decisions.”

Feinstein spoke about his work with the Green Party, his concerns about climate change, closing the airport, capping the freeway, building new parks throughout the city, creating a public solar utility, protecting, and expanding Bergamot.

Feinstein said, “I see the big picture. I talk with everyone. I think government should be open. And I believe anything is possible.”

Gruber said, “I’m running to continue the tradition of more than 30 years of progressive government in Santa Monica.”

Phil Brock, Recreation and Parks Commissioner and Chair, talks about Santa Monica and why he is running.

“I stayed in the city I was born in,” Brock said. “It’s the openness of Santa Monica that we like. It’s that magical combination of great schools, superb green space, the ocean, the cool breezes and the notion that a city could be more humane, more livable and more unique….”

Even at this early date there are front-runners, contenders, and candidates the public hasn’t yet met. All candidates are invited to participate at the City Council Candidates Forum held by Residocracy.org and the City Neighborhood Groups. The forum, which is free and open to the public, will be held this Monday, July 28, at the Santa Monica Main Library’s Martin Luther King Auditorium. Doors open at 6 pm; event from 6:30-9 pm.

I start my day with an early morning beach walk. With the wonderful feeling of my feet in the sand and in the water. As I walk I think about how we elect leaders and the money we spend. I wonder why campaigns are volatile and issues urgent. Then I remember that politics care even if we don’t want to be bothered. The decisions made by our elected leaders impact the quality of each Santa Monican and that it is only by caring about politics that we take care of ourselves and of future generations of Santa Monicans.