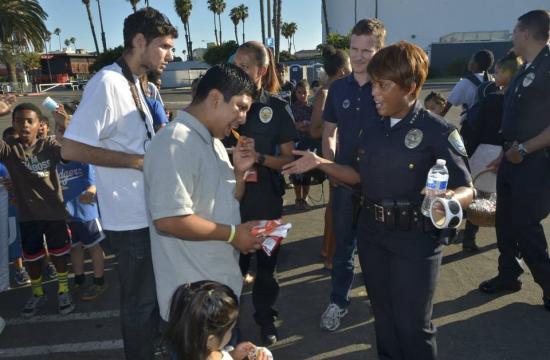 The National Night Out celebration in Santa Monica on Tuesday evening was an overall success with an estimated crowd of attendees around 1,300 to 1,500 throughout the event, according to the Santa Monica Police Department.

National Night Out involved more than 37.8 million people and 16,124 communities from all 50 states, U.S. territories, Canadian cities, and military bases around the world.

SMPD Sgt. Rudy Camarena said National Night Out was an opportunity for the Department to honor the relationship the police and community share together.

“This partnership helps to make Santa Monica a safe place to live, work, and visit,” he said. “The event is designed to generate support for and participation in local anti-crime efforts. ”

The event was held in the Santa Monica Civic Center parking lot from 6-8 pm.

Along with showcasing SMPD personnel and equipment there was music, demonstrations, carnival games, free food and drinks, and more.