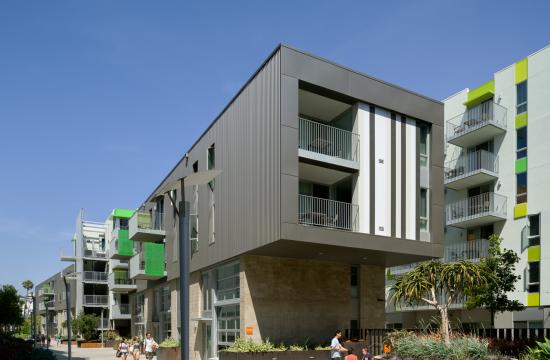 Nine years in the making, the grand opening for Belmar Apartments in Santa Monica was held Thursday.

The affordable housing development located at 1725 Ocean Avenue includes 160 new apartments that are now home to a diversity of households.

It is the largest single affordable housing development that the City has helped finance.

Most of families in the new apartments already lived or worked in Santa Monica, and finding affordable housing near their jobs, schools, and extended family members has been life-changing for many of them.

Monica Ayala, who works at a grocery store on Pico Boulevard in Santa Monica, recently moved to the Belmar Apartments with her three children.

Ayala expressed her excitement about living there and shared that the day her family found out that they had qualified for an apartment was “the best day of our lives.”

Bill Witte, President of Related California, lauded the public-private partnership with the City that made Belmar Apartments possible.

The development has been nine years in the making, and the consensus at the grand opening was that it was worth the wait.

CCSM will provide an on-site resident services coordinator and will offer a variety of programs ranging from school readiness to after-school tutoring.

Belmar Apartments, in concert with the residential buildings to the north and south and the already well-used Tongva Park, is playing a key role in bringing activity back to the Civic Center’s core and creating a fully functioning neighborhood.

State Assemblymember Richard Bloom said, “at a very fundamental level, this place is about people; the people who will live here [and] establish this neighborhood.”

In light of the dearth of funding for affordable housing, Andy Agle, Director of Housing and Economic Development for the City, issued a call to action for the community to come together to develop strategies to continue to address the housing needs of all families.