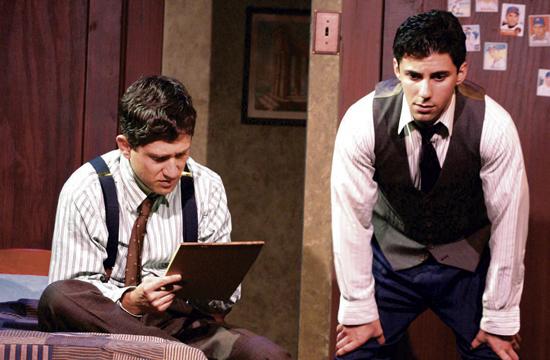 Once in a while, someone decides to revive an old chestnut. Sometimes it’s a waste of time and sometimes it’s fun to welcome an old theatrical friend.

In the case of the current production on stage at the Odyssey Theatre, it’s a welcome treat to visit Neil Simon’s semi-autographical “Broadway Bound,” the third play of Simon’s Eugene trilogy, with “Brighton Beach Memoirs” and “Biloxi Blues,” the first two of the three plays in which the character of Eugene is his alter ego.

Jason Alexander directs this revival and does so brilliantly, with every moment on stage fully realized.

What probably made it most challenging and perhaps fun for Alexander is that he played Stanley in December 1986 when it opened on Broadway at the Broadhurst Theatre. Directed by Gene Saks, the sterling cast included Jonathan Silverman, Phyllis Newman and Linda Lavin, who won a Tony for Best Actress in a Play as well as a Drama Desk Award. The play was also a finalist for the Pulitzer Prize in 1987.

Eugene, perfectly brought to life by Ian Alda, and his brother Stanley, played by Noah James, who likewise does a wonderful job in climbing into his character’s skin, are budding young writers waiting for their big break. Gina Hecht plays Kate, Eugene, and Stanley’s long-suffering mother.

In a top-notch performance, we see the many layers of Kate who, despite her rather rough exterior, lets us glimpse the tenderness and hurt that lives inside of her. Rounding out the immediate family is Kate’s father Ben, played by Allan Miller, a well-seasoned theatre veteran who mines all the nuances of his character and is a master of non-verbal reactions, and his other daughter Blanche, suitably played by Betsy Zajko.

Ben is separated from his wife and Blanche tries to convince him to move to Florida with her mother. Ben has distain for his daughter’s lifestyle as she married a wealthy man and shows up wearing an expensive mink coat. Her lifestyle flies in the face of his socialist beliefs.  Blanche is starving for her father’s affection and he comments, “I don’t believe in affection. It’s something they give you instead of the truth.” Blanche wants to drive him somewhere to which he barks, “A socialist sitting in a Caddy with a black man driving?”

Simon’s dialogue is packed with hilarious lines as well as heart wrenching moments.  For example, Ben is a Trotskyite and tries to steer his grandsons in that direction.  After being prodded to read more, Eugene says that he’s read a book on Trotsky to which Ben grunts, “One book doesn’t cover Trotsky.” Ben is aging and resents being taken care of by his daughter. He tries to smuggle out soiled sheets in a paper bag so that she doesn’t find out that he wet the bed. Trying to get out of the house, Kate stops him because of the slippery streets. He remarks to one of the boys, “I was going out but your mother changed my mind.” In what could be described as behaving like a “typical Jewish mother,” Kate is overbearing in executing her multiple responsibilities and exhibits very little happiness.

It should be noted that the character of Eugene serves as the narrator, breaking the fourth wall throughout the play to explain the action, and Alda moves seamlessly in and out of the action.  He complains to the audience that his family doesn’t think he’s funny.  He is also in love with a girl who is engaged to a guy going to Harvard, but he’s determined to win her over.

Now, in the meantime, the brothers have their sites set on becoming comedy writers for radio and maybe eventually even television.  Stanley comes charging in overwhelmed with excitement and announces that he and his brother have a script-writing job at CBS.  As it turns out, it’s not a job, but just an opportunity to come up with a sketch by the morning – kind of like an audition. One of the funniest scenes is when the brothers try to come up with a sketch idea. Running back and forth between their bedrooms on the second floor of the set, ideas are tossed around with Stanley becoming more and more frustrated as Eugene can’t seem to focus. He wants to take a train into the city to visit the girl with whom he is in love.

Jack, effectively played by Michael Mantell, is Kate’s husband and it is clear that there is no love or affection between them. He has been a cutter in the garment industry for the past 33 years, and at this point in time he is very distant and says he is emotionally exhausted.  She is angry and pushes him to confess that he’s had an affair.  Heartbroken, Kate says, “How could I hate you so much after loving you all these years.”

That confrontational moment is a heartbreak, which is why Simon’s writing falls under a dramedy, as it is a combination of laughter and tears as the layers of this family dynamic are slowly pealed back. The boys find out about their father and for a good portion of the proceedings, Jack and Kate live together but do not speak to each other. They refer to each other in the third person, “Ask him if he is going be home for dinner,” or “Ask your mother if….”

Meanwhile, the boys have finally gotten one of their sketches to air on the “Chubby Waters Show,” and the family gathers around the radio to hear it for the first time.  Eugene and Stanley are very excited. Chubby makes a few remarks to which Ben reacts, “In Russia he’d be shot by now.” Finally the sketch comes on with some very funny one-liners such as, “My family doesn’t say hello to my family.” At the end of the sketch, a gloomy silence fills the living room. The boys are looking for some acknowledgment.  Ben says, “If I don’t hate it, it’s not bad.” Kate is quiet as is her husband who feels betrayed because it’s clear to him that the sketch is about their family. She is embarrassed for the neighbors who she told to listen to the broadcast. The boys insist that it’s not about them, but it’s about a generic Jewish family.

Kate has two special theatrically magical moments. One is her intimate conversation with her unseen mother, which is quite revealing as she tries to hold back the truth about her marriage, which is slowly splintering. The other, both a compelling and charming moment, is when she drops her austere façade and tells Eugene about the time she danced with George Raft. Her mesmerizing recall of that life-changing incident, coupled with the graceful slow dance she does with Eugene, is truly one of the most beautiful scenes in the play.

This is not a totally happy ever after story, as some issues can’t be resolved between Jack and Kate. There is a tender scene between Jack and Ben with Jack trying to justify his decision. Miller’s heartfelt Ben is like the unofficial court jester who tries to soften the world around him with his sardonic humor and underneath it all, his warm heart.

Eventually, Eugene and Stanley get their big break and are hired by CBS to write for the “Phil Silvers Show,” at which point they decide to move into the city. Kate reminds them, as only a Jewish mother could, “If I don’t get grandchildren, what did I need children for?”  And that, my friends, sums up the cockeyed world of the Jerome family.