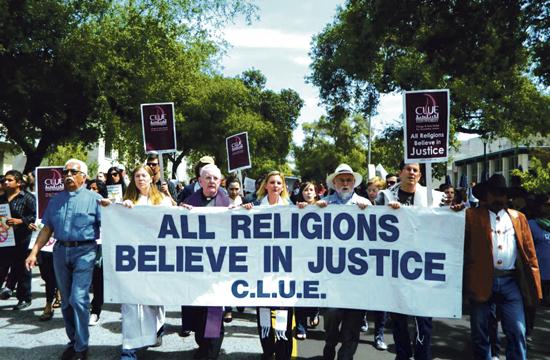 The issues of income levels and employee rights have been relevant for decades in the United States – and an ongoing hot topic of conversation in Santa Monica.

On the local front, The Clergy and Laity United for Economic Justice of Los Angeles (CLUE-LA) was born in the 1990s in response to the living wage movement in downtown Los Angeles.

Religious leaders mobilized to join the effort in passing a law that mandated businesses with Los Angeles city contracts to provide health benefits and adequate wages to its employees. CLUE-LA was formed after this legislation successfully passed in order to continue supporting low-wage workers.

What struck the attention of various religious leaders was the apparent need for another source of input.

The voice of labor existed with the unions, whereas the voice of policy stemmed from an advocacy organization (the Los Angeles Alliance for a New Economy). A third, more personal voice, one that could speak on behalf of the mental and emotional stance of the people involved, seemed to be necessary.

With this perspective in mind, CLUE-LA set out to “join low-wage workers in their struggles for justice” by uniting religious leaders of all faiths. Workers seeking justice and fairness frequently come face-to-face with fear, intimidation, and harassment. The religious leaders at CLUE-LA seek to serve as counselors and friends, as well as provide a faith community that can offer assistance to those enduring unemployment and other hardships. CLUE-LA realized the potent impact of a good job and its effects on a person’s life and relationship.

“There was a void at the table, a missing voice,” Gabriella Rosco, a CLUE-LA organizer in Santa Monica, said. “Employees aren’t just defined by their working status. They’re also parents, spouses, and neighbors.”

CLUE-LA now collaborates with more than 600 religious leaders and 1,200 laypeople all over Los Angeles County, with churches representing a versatility of denominations and ethnicities, from Muslim mosques, Christian evangelicals, historic African-American churches, and Hispanic Pentecostals.

In Santa Monica, religious leaders represent Christianity, Judaism, and Catholicism, though they are always seeking to expand. Throughout CLUE-LA as an entire regional organization, almost all major religious parties are represented, including Buddhists, Muslims, and Hindus.

Clergy members will gather to discuss various campaigns that CLUE is involved with.

In Santa Monica, the three citywide campaigns are categorized into the hospitality industry, car wash industry, and iron worker industry. They share stories and updates and decide how CLUE should move forward. Courses of action could include conducting specific religious events, to which even non-religious people attend because of their emphasis on employee unity and economic justice.

“There are atheists and non-religious people on the Santa Monica committee,” Rosco said. “They are fine with operating within an inter-faith setting because of their common belief in justice.”

Clergy members also visit workers’ homes in order to converse with and counsel them on a more personal level.

“We are calling for change because we believe in the importance of emotional/spiritual tension, care, and awareness,” Rosco said. “We want to emphasize the value and humanity in everybody, in the workers as well as the managers and owners who employ them.”

As one of the results of the organization’s hard work and effort, CLUE-LA unionized the first car wash in the entire country, a monumental feat considering the fact that the car wash industry is sometimes referred to as modern-day slave labor.

In 2011, Bonus Carwash in Santa Monica signed a union contract that upholds all health and safety laws and grant its employees union recognition with the United Steel Workers Union.

Rosco attributes all this to taking some of the heavy emphasis off of the money and the politics and focusing on the personal lives of the people involved.

“Conversations change once faith comes into the picture,” Rosco said.

There are also new developments occurring within the hospitality industry, another one of CLUE-LA’s campaigns in Santa Monica, which regularly treats its workers harshly and unfairly with the tasks they are assigned and the low living wages they are paid.

CLUE-LA appreciates all donations and volunteer work from the surrounding community, as well as any interest in getting involved directly with the ongoing conversation about economic justice.