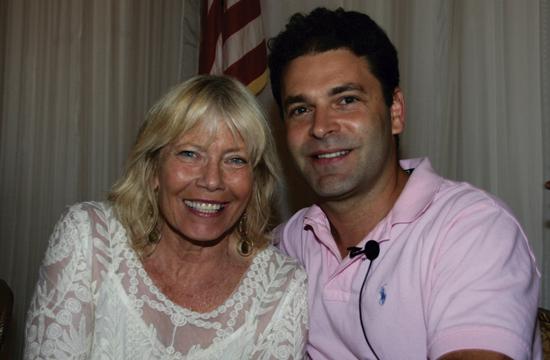 The Rotary Club of Santa Monica is one of thousands of Rotary organizations that seek to better the world through humanitarian service and educational activities.

In fact, there are Rotary clubs in more than 200 countries in the world that are continually seeking improvements at local, national, and international levels.

The stand-out element of the Rotary concept, however, is the fact that each individual Rotary club, despite the extensive amount of distance that Rotary covers around the world, has an awe-inducing amount of impact on both small and large scales.

True to its mission, the Rotary Club of Santa Monica addresses both the aspect of humanitarian service and intercultural, educational activities — all in just a typical weekly meeting.

After hearty, warm greetings were exchanged, traditional opening songs were sung, and guests and new members were introduced, the meeting commenced with President George Collins leading the order of events.

At the Rotary Club of Santa Monica, weekly meetings address ongoing and future Rotary activities, recap previous events that the Rotary was involved with, and welcome a guest speaker as well.

True to its mission, the Rotary club meeting encompassed both philanthropic services and educational opportunities.

As a part of an update, JT Waring, who has been abroad serving the people of Myanmar as a Rotary Club member, gave an announcement about a swimming pool that the Rotary organization built and finished successfully at a Christian orphanage in Myanmar that houses 118 children.

This aligns with the Rotary’s goal to further international understanding through partnerships with other countries.

Waring said that the Rotary Club of Santa Monica was the “major individual entity contributor” to the construction of the $26,000 swimming pool, which was built in order to keep the children of the orphanage off of dangerous streets. After Cyclone Nargis devastated Myanmar in 2008, the children “had lost everyone and everything.”

At the orphanage, “there weren’t very many recreational opportunities” available prior to the completion of the swimming pool. Presently, water safety instruction has been taught to all of the children, who are “thoroughly enjoying their pool.”

Waring expressed his appreciative sentiments toward the Rotary Club of Santa Monica and the members’ contributions, extending an invite to visit and see the pool and stating that he “was grateful beyond belief.”

Another significant Rotary contribution was given to the Santa Monica Family YMCA in the form of a grant award of $10,000.

Pomposini highlighted the consistency of the generosity of the Rotary Club, mentioning that the first Rotary Grant the Santa Monica YMCA received was back in 1940. She said that the “generous gift” would go toward “enhancing the camp facilities,” specifically the cement Block House.

An announcement regarding the recent American Cancer Society (ACS)’s Relay for Life (RFL) held at Santa Monica College was made by Julia Miele, the executive director of the Santa Monica/Westside YWCA.

The Rotary’s participation as a RFL team was again able to make a dent in the ACS’ efforts toward finding cures and treatments for cancer, as the Rotary Rockets’ efforts brought forth a total of $4,854 as of Jul. 27.

Following the announcements and updates was the special guest speaker of the meeting, who was introduced by Laurel Rosen, President and CEO of the Santa Monica Chamber of Commerce.

Ronen Olshansky, co-founder and CEO of Cross Campus, spoke to the Rotary Club as the esteemed guest of the day.

Olshansky first explained the concept of Cross Campus, which is a company that seeks to “define a new model of office space.”

Cross Campus essentially provides an expansive and dynamic office space that offers a variety of amenities that mesh together to create a comfortable environment to help productivity levels achieve their maximum potential.

Ideal for entrepreneurs and businessmen in this day and age, Cross Campus is well-aware of the fundamental changes occurring within the corporate world and has created custom package deals for those who are interested in renting office space.

Olshansky elaborated on what the future of the office is and what kind of environment needs to be built to accommodate such changes.

As many millennials will never even work in an office or a cubicle, Olshansky observed the idea of a campus-style workplace, similar to Google and Facebook headquarters, and utilized the model as an idea of where office is going.

Leading the audience through a presentation of “500 years of office history in five minutes,” Olshansky briefly but thoroughly covered the beginnings of office at the Uffizi in Florence, Italy, to the ideas of Jay Chiat and Bloomberg near the end of the millennium.

His speech certainly educated the audience on the present stance of the office concept and corporate life, which can sometimes be vague and difficult to understand.

In a single meeting, the Rotary Club of Santa Monica accomplished its core mission of giving back and improving the world and emphasized its value of education at the same time.

Speaking at the next Friday meeting will be Steve Beauregard, who is the founder and CEO of BitCoin.