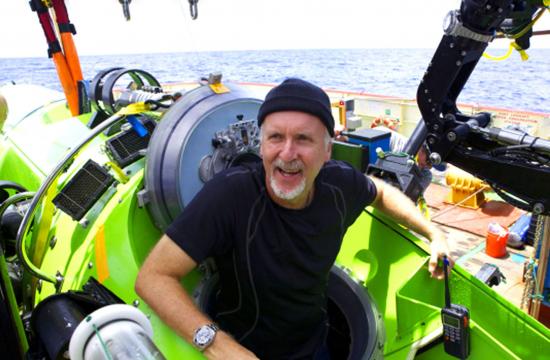 Award-winning filmmaker James Cameron’s fascination with the sea began as a youngster when he was inspired by “The Undersea World of Jacques Cousteau,” popular television specials that aired in the 1960s and 1970s.

By age 16, he was scuba-certified, unusual for a young man living in a small town in Canada.

Later in life, he would combine his love of ocean exploration with his scientific mind and create new technology both for filmmaking and journeys into the deepest oceans.

After working as a machinist and truck driver, Cameron decided to go into filmmaking, cutting his teeth on a low budget science fiction film as a self-taught designer and visual effects artist.

His breakout film was the box-office hit “The Terminator,” followed by his multiple award-winning films, “Titanic,” and “Avatar, which were two of the highest-grossing films in cinematic history.

Cameron is not your usual director, as unlike most filmmakers, who use off-the-shelf existing technology, Cameron blazes new trails in visual effects, designing and creating the equipment needed to fulfill his vision.

“Avatar,” for example, took over two years of research and development resulting in never before seen images, for which he earned Golden Globes for Best Director and Best Picture, as well as three Academy Awards out of the nine nominations

As National Geographic Explorer-in-Residence, Cameron, who was the Mariana Trench Expedition leader in 2005, worked with co-designer, Australian Engineering Manager Ron Allum, and assembled a handpicked crew of international visionary engineers and scientists and so began the painstaking building of the Deepsea Challenger sub.

This one-of-a-kind submersible, which looks like a vertical torpedo, has two newly invented exterior cameras for shooting 3D images deep inside the ocean.

Prior to embarking on what would be an historic dive with a newly invented state-of-the-art submersible, Cameron made 72 dives, including 33 to the wreck of the Titanic, which rests two-and-a-half miles down on the ocean floor.

He logged in more hours on the ship than Captain Smith, who went down with the ill-fated vessel.

It took seven years of research, design, building, and testing until this new submersible was ready for the ultimate dive to the bottom of the mysterious Mariana Trench, located in the western Pacific Ocean, the deepest part of the world’s oceans.

Considered one of the last frontiers on planet earth, it is a 1,500 mile-long chasm in the earth’s crust, measuring 35,800 feet down at its deepest point, which is higher than Mount Everest with an Alp piled on top or equivalent to two stacked Empire State Buildings.

This breathtaking documentary, directed by John Bruno, Andrew Wight, and Ray Quint, the latter two who also wrote the script, is a fascinating look at the creation of this innovative submersible.

It reveals Cameron’s steely focus to bring his dream to fruition, and his fearlessness in being the first man to pilot this new technology that would take him deep into unknown, unchartered, and mostly unexplored waters.

The only exception was the one-time descent into the enigmatic Mariana Trench by Lt. Don Walsh and Jacques Piccard in 1960 in a U.S. Navy submersible called a bathyscaphe.

The now 80-year-old Walsh was present during the building of the  Deepsea Challenger.

The extraordinary camera work by Jules O’Loughlin ACS and John Stokes ACS, takes you inside the cramped cock pit as Cameron journeys to the bottom of this hidden sea, capturing the adventure and potential danger, as well as revealing unseen creatures of that deep, dark, mysterious world in 3D.

Cameron spent a total of six hours in the trench shooting footage and collecting samples from the ocean floor.

Subsequent analysis of the specimens collected by the two exterior arms during this and other dives uncovered 100 life forms identified as new species, including a shrimp-like amphipod that produces a compound already in clinical trials to treat Alzheimer’s disease.

As a result of his unrelenting pursuit of both scientific exploration and innovative filmmaking, James Cameron can claim permanent membership in an exclusive club of technological visionaries.

His work reminds us that there are still many more secrets to be discovered on our planet as the earth is far from being fully explored.