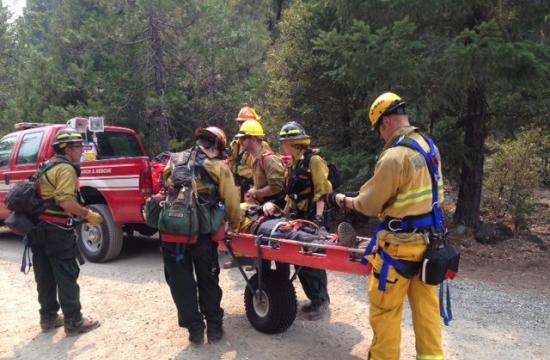 As part of the unique deployment of Urban Search and Rescue (USAR) resources to the California-Oregon July Complex Wildfires, Santa Monica Firefighter Joe Cavin, led by Los Angeles City Captain Cecco Secci and a six member team, was dispatched to a water tender accident where it rolled 150′ down the side of a mountain trapping the driver/operator on Tuesday, Aug. 12.

The team responded and successfully extricated, treated, and rescued the operator with a two line rope rescue system and a wheeled litter basket.

Their quick efforts and technical skills led to a successful rescue.

The team has been deployed to this area because traditional methods of extricating injured firefighters (via helicopter) is not possible given the thick forest of trees, the steep slopes and the low inversion layer.

Firefighter Cavin is part of the six member team, called a Rapid Evacuation Module (REM) made up of firefighters from other agencies.

This team is providing instruction to the brush firefighters on the fire-line on low angle rope rescue.

In addition, the team is on call 24/7 in the event that a rapid evacuation of an injured firefighter is needed or other rescue situations such as the one that occurred on Tuesday.

The water tender driver/operator is said to be listed in stable condition at an area hospital with some fractures.

The REM is on a 14 day deployment to the area.