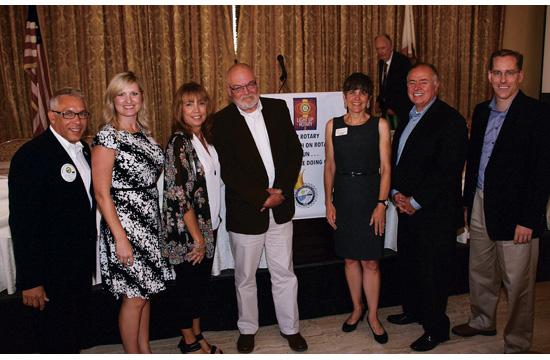 The Rotary Club of Santa Monica held its weekly meeting on Friday, Aug. 22 at the Riviera Country Club with the spotlight on its major fundraising event, the upcoming Wine & Jazz Festival.

To kick off the meeting, the Santa Monica branch welcomed its fellow Rotarian from a club 3,000 miles away.

CeeCee Saikao was an honored guest from the Rotary Club of Honolulu this past week. Other guests included Lynne Thomas, Suzanne Peckels, and Amazin Money-Walker. Allison Hastings, Carole Sarian, Matt Fienup, and Stacy Swanson were guests of the speakers of the day.

Club members and guests sang signature Rotary tunes like the “welcome” song for visitors and new members, which always brightens the atmosphere of the meeting room and allows the Rotarians to join together in a simple but entertaining collective activity.

With the head table consisting of Mitch Kraus leading the invocation, Christine Mirasy-Glasco of Upward Bound House acknowledging the day’s guests, TJ Montemer introducing the guest speakers, and of course, President George Collins presiding over the entire meeting, the Rotary Club members assisted in helping the agenda transition more smoothly throughout the afternoon.

Blood drive co-chairs Ann Greenspun and Erik Jorgensborg announced that an annual Red Cross blood drive would be held Sep. 12 from 2 pm to 8 pm at the American Red Cross at Broadway and 11th St. in Santa Monica.

President George Collins and Karim Jaude also reported on the $50,000 matching grant received by the Rotary Club of Santa Monica to fund solar panels for 400 homes in northern Colombia. A village that has never had electricity running through their homes will be able to utilize the resource.

Before the guest speaker portion of the meeting commenced, Len Lanzi and Judy Neveau shared with their fellow Rotarians the details of the Wine & Jazz Festival, the Santa Monica Rotary Club’s one and only major fundraiser set to take place Oct. 19.

Suzan Allbritton elaborated on the event, as she is in charge of the sponsorships and ticket sales for the wine festival.

Lanzi informed the audience that food would be provided from Santa Monica’s renowned FIG Restaurant, and Neveau donated a gift card to jump-start the contributions made to the Rotarian basket that the event chairs introduced. All items in the basket will go toward supporting the Wine & Jazz Fest.

Neveau also informed The Mirror that the proceeds of the event would be going toward Upward Bound House, one of the non-profit organizations that the Rotary Club of Santa Monica advocates for.

“The organization provides educational and housing services for homeless families with children,” Neveau explained. “They have support services that help the kids get enrolled in local schools. It’s been a wonderful project to be able to fundraise for such a great cause.”

Neveau said that the Rotary Club seeks to help with obtaining more furniture for the families that move into the housing units that Upward Bound House provides. The overall mission of Upward Bound House is to “eliminate homelessness among families with children” by providing a means of housing as well as supportive services like parenting classes, financial literacy courses, and children’s enrichment activities.

In the weeks to come, more information from Lanzi, Neveau, and executive director Christine Mirasy-Glasco will be available about the noteworthy collaboration between the Rotary Club of Santa Monica and Upward Bound House via the Wine & Jazz Fest.

With the preview announcements made about the Wine & Jazz Fest, the meeting continued with the guest speakers. Though the structure of speech was unconventional, the two speakers’ professions were actually highlighted through the way the presentation was set up.

Tim Gallagher, president and founder of Gallagher 20/20 Network, asked Bill Watkins, the executive director of Cal Lutheran Center for Economic Research and Forecasting, various questions about the economy in a session appropriately titled: “20 Questions/20 Minutes for the Economy.”

Gallagher and Watkins covered a wide range of topics, varying from the unemployment rate, the recession, and the current drought. For parents – as well as prospective parents – present at the meeting, Watkins also addressed the practical subject of what majors are best to study in college.

“We’re in need of more engineers,” Watkins said. He continued on to say that the tech industry in general is an ideal place to start.

One of the Rotarians asked about childcare in America as it compared with other regions of the world such as Scandinavia, revealing that parenthood is one of the more heavy topics of concern.

Today, there will be no weekly meeting due to the Labor Day holiday weekend.

Stay tuned for more in-depth information regarding the Wine & Jazz Festival, which will be held at the Museum of Flying in Santa Monica on Sunday, Oct. 19.