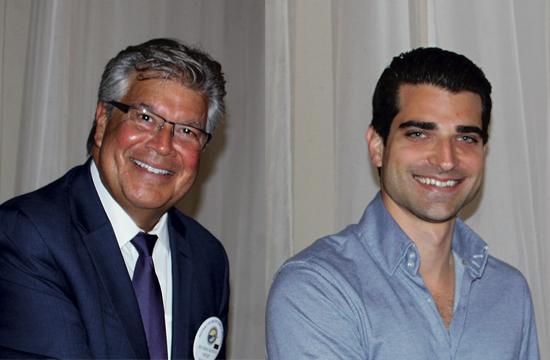 On Friday, Aug. 15, the Rotary Club of Santa Monica commenced its weekly meeting at the Riviera Country Club in Pacific Palisades with the usual warm, hearty greetings among both members and guests.

As the Rotarians seated themselves at the round tables with plates full of freshly made food, the head table led the club into a few group sing-a-longs.

Aside from the usual patriotic number – this week the club collectively crooned to “America the Beautiful” – another song was added into the mix in honor of the day’s Craft Talks.

To ready the club members for the upcoming Craft speakers, a cleverly written song was utilized to the tune of the all-too-familiar Flintstones theme song, which successfully played its part in brightening up the overall atmosphere with a melody that likely triggered a sense of nostalgia for many in the room.

Craft Talks is a special event during which Rotary Club members themselves speak to the club a “couple of times a year,” according to Rotary club member RoseMary Regalbuto, former president and CEO of Meals on Wheels West. Regalbuto explained the Craft Talks with a fitting analogy.

“These talks are like the backside of the business card,” Regalbuto said. “They reveal what the front side doesn’t tell.”

Since the Rotary club members are very proactive within their respective lines of work, it makes sense that they tend to be known for their professions.

Craft Talks offers the Rotary Club of Santa Monica the opportunity to become more acquainted with their fellow members as each Rotarian takes their turn sharing parts of their life stories to the club.

“We try to get everyone up there once,” Regalbuto said. “So the newer members are usually the ones speaking.”

Before the awaited Craft Talks began, guests of Rotarian members were greeted by the club with a friendly welcome song.

With a few Boy Scouts as some of the club guests that morning, the club was led into a brief moment of reminiscing as all former Boy and Girl Scouts were asked to raise their hands and recognize their common denominator of childhood.

Members who celebrated July or August birthdays were also recognized as the head table asked the celebrants to come to the front of the room to receive gifts prepared by the club.

Exchange students who participated in a group study exchange sponsored by the Rotary Club came and shared stories from both Asia and Europe.

After these noteworthy announcements, Rick Mateus kick-started the Craft Talks by recounting his significant life events, from where he went to school to his interest in baseball.

Several members could relate to his stories, including the next Craft speaker, Eric London, who found out he attended the same school as Mateus’ wife and played baseball as well.

London, who joined the Rotary Club in February of last year, also shared some of his intriguing life experiences, from runway modeling to meeting his wife for the first time.

As always, the Craft Talks were met with great, supportive feedback by fellow Rotary club members.

As for upcoming events, President George Collins has notified The Mirror that the Rotary Club will be funding the construction of solar panels for 400 homes in a village in northern Columbia through a matching global grant that the club received.

This village has never experienced living with electricity before. Perhaps the most impacting result that this project will have is the fact that students who normally study by candlelight will be able to have the convenience of electricity in their homes.

In addition, one of the Rotary Club’s most major events, the upcoming wine festival, is set to take place on Oct. 19.