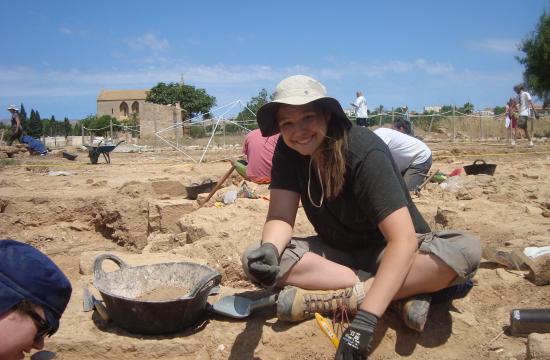 Santa Monica teen Cecilia Brine recently returned home after working on an archaeological dig at the Roman City of Pollentia, in the Mediterranean island of Mallorca, one of the most important Roman cities in the days of the Republic and the Empire.

The 16-year-old attended the dig organized through ArchaeoSpain, an educational and archaeological organization based in Connecticut and Madrid

The crew found several human burials before reaching the Roman layers of a marketplace. The group excavated until hitting Roman pavement, along the way uncovering several Roman coins. They also uncovered the remains of some Roman taverns and what is thought to be the Roman city’s oldest building.

Students at the Pollentia field school, one of the few such programs in the world for high school students, learned excavation and surveying techniques, plus how to treat and catalogue artifacts. They also attended talks on Spanish history and archaeology, how to draw artifacts, in addition to taking excursions on the weekends to nearby historical sites.

“Cecilia and her co-workers have learned not only how to conduct an excavation and how to interpret the archaeological clues discovered, but they have experienced Spain away from the tourist traps and bonded with a local community,” said ArchaeoSpain director Mike Elkin. “Over the past few years, our joint Spanish-international teams have uncovered priceless information about Spain’s ancient past.”

Elkin said in recent years, ArchaeoSpain has assisted in major discoveries at various sites in Spain and Italy. Our other high school group excavates the Medieval Castle of Zorita, 60 miles away from Madrid.

“At Monte Testaccio in Rome, our team is helping unearth clues about Roman trade throughout the empire,” Elkin said. “In Son Peretó, also in Mallorca, we are excavating a Byzantine settlement dating to the 6th century. And at Pintia in central Spain we are digging an Iron Age necropolis that dates back to the 5th century BC.”