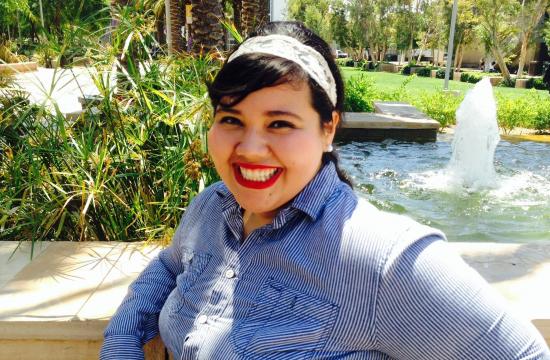 “PALS Scholars embody the very best of the School of General Studies—academic accomplishment coupled with a commitment to leadership that, as nontraditional students, was nurtured and developed while overcoming many obstacles in their personal and professional lives,” said Peter J. Awn, Dean of Columbia University School of GS. PALS Scholars are typically first-generation college students, members of historically underrepresented groups with high financial need and a demonstrated ability to succeed in a competitive academic environment.

When Sandoval received a FedEx envelope, she thought it was a Jilian Michaels exercise DVD she had ordered – until she saw the return address. The envelope contained her acceptance letter from Columbia University and a few weeks later, Sandoval was informed that she had been selected for the university’s PALS scholarship.

“I started bawling on the phone,” said Sandoval. “I thought it was a joke!” Recipients do not apply for this scholarship – which was created in 1999 – but are selected by a committee comprised of admissions officials at Columbia University School of GS.

Born in Las Vegas, Nevada to immigrant parents, Sandoval lost her father to AIDS when she was four and was raised by her mother – a housekeeper at a hotel and casino – who instilled in her the importance of education. In high school, Sandoval, who was in the top eleven percent of her class, shared with a counselor her dream to go to the University of California, Los Angeles (UCLA); she was told that it was not a viable dream “due to cost” and was advised to remain in Nevada.

She dropped out of high school but later joined the University of Nevada, Las Vegas (UNLV) as a non-matriculated student, where she excelled and found her passion for social justice and her love for the performing arts. Sandoval presented at academic conferences including the National Women’s Studies Association and Living Without Borders and became an active social organizer and a spoken word artist.

She translated her experiences as a survivor of poverty, childhood sexual assault and homophobia into poetry that she describes as “both political and personal, opening what society taught me to mask,” writing about topics like migrant mothers and survival economies, working multiple jobs while in school, and wearing safety pins on ripped backpacks to keep them from falling apart.

While at UNLV, Sandoval decided to postpone her education for financial and personal reasons, which included being diagnosed with Post-Traumatic Stress Disorder; she spent subsequent years working at the Las Vegas Rape Crisis Center and during this time she also co-produced and co-directed a Spanish version of The Vagina Monologues in Las Vegas.

In 2011, Sandoval decided to continue her education, so that she could make an even bigger impact – she chose SMC because she had heard about the college’s reputation as California’s Number One transfer institution.

At SMC, Sandoval majored in Women’s Studies and won academic achievement awards from the college’s Extended Opportunity Programs and Services and Disabled Students Programs and Services, three scholarships and maintained a 3.53 GPA despite housing and economic hardships.

Here, Sandoval rediscovered her interest in Biology – she will be majoring in both Women’s Studies and Biology at Columbia University School of GS.

“This wasn’t a one-woman show, it was a full production,” says Sandoval. When the time came to apply to universities, Sandoval felt “debilitating fear” but her support network at SMC – counselors, professors, and staff – ensured she dreamt even bigger than UCLA. Sandoval was accepted into 10 out of the 12 schools she applied to, including UCLA, UC Berkeley, and Loyola Marymount University.

“Grace’s humanity fuels her efforts for social justice and makes her a force for social change,” says Christina Preciado, SMC Sociology professor. “She will leave the world a better place than she found it.”

Sandoval’s future plans include participating in biological research – specifically immunology – and combining her strengths in social justice and life science to transform communities, especially the marginalized. And one more thing: “Someday, I am going to buy my mom a house,” declares Sandoval.