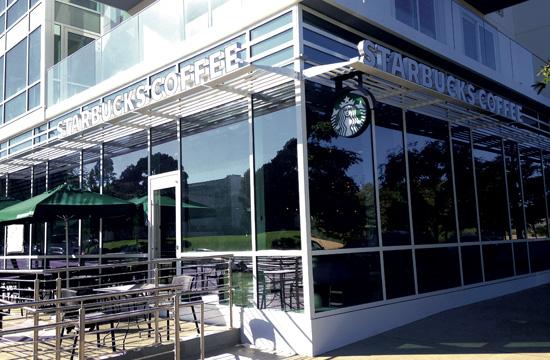 The sign on the building’s façade might read “Starbucks Coffee,” but the Seattle-based chain sporting a mermaid for a logo gained support for a conditional use permit (CUP) by the Santa Monica Planning Commission on Wednesday to serve beer and wine at one of its newest locations across the street from City Hall.

Located within the mixed-use project known as The Village, the Starbucks on the corner of Main Street and Olympic Boulevard sought to be given a CUP to serve select alcoholic beverages on-site between 2 pm and midnight from Monday through Saturday and noon to 11 pm on Sunday.

In order to meet the City’s “Alcohol Beverage Control” requirements, Starbucks will offer an expanded menu, which, according to City staff, would include “food service of warm and cold small meals on ceramic dishware to accompany the incidental sale of alcohol.”

“There is no bar area proposed, and it is not the applicant’s intent to materially change the atmosphere or the environment of what is typically associated with a Starbucks location,” City staff stated.

During their deliberation, planning commissioners discussed whether on-site beer and wine consumption was compatible with the surrounding neighborhood and whether conditions attached to the CUP would minimize “potential alcohol-related adverse impacts.”

Those conditions included limiting total seating at the Starbucks to 90 spaces, ceasing the service of alcohol in the patio area within one hour of closing time, and establishing the hours of when beer and wine could be served.

As part of the CUP, the Starbucks at The Village would be required to deliver food and alcohol to the customer’s table. Further, a customer must order a full meal with their respective alcoholic order. The beer and/or wine must be consumed while sitting at a table.

The conditions were approved by a 5 to 1 vote.

Alcoholic beverages would be stored in the back of the house area and would not be displayed in the retail area.

Serving beer and wine at the Seattle-based coffeehouse is part of its “Starbucks Evenings” concept.

Alcohol is served at another establishment – Chez Jay – within immediate walking distance of the Starbucks location at Main and Olympic.

A concern raised prior to and at the Planning Commission meeting was the accessibility of alcohol within 690 feet of the southeast corner of Samohi. Of course, alcohol is available for sale at 7-Eleven on the corner of Lincoln and Pico, which is about one block away from Samohi.

Another concern raised prior to the meeting is whether the Starbucks Coffee at the Civic Center is the type of venue a majority of its customers would drive or walk.

Commissioner Sue Himmelrich, who stated during deliberations she was not supportive of the “Evenings” concept at the proposed location, asked how alcohol would be monitored in the outdoor patio area if the Starbucks employees maintained the franchise’s regular practice of serving its customers from behind the counter.

Representatives of Starbucks estimated about eight “Starbucks Evenings” concepts are already operational nationwide, with plans to expand the unique brand to about 300 locations.

However, on the Starbucks website, nearly three dozen “Evenings” locations are listed nationwide.

The Starbucks Evenings location in Calabasas is within three-quarters of a mile of a school but only sells six to 10 glasses of wine per day, Starbucks representatives told commissioners.

“I actually don’t think it’s a bad location to have a glass of wine. I oppose it because I don’t think it’s the appropriate place to serve alcohol,” resident Laura Wilson told commissioners. “Since when did Starbucks become a bona fide eating establishment?”

Wilson added whether the Starbucks Evenings concept would start a slippery slope of other businesses, such as Coffee Bean & Tea Leaf or Taco Bell, applying for liquor licenses.

Yet another question raised was how the parking options in front of and near Starbucks would be able to accommodate customers.

A representative of The Village’s developer told commissioners the retail food landscape is changing in favor of alcohol service and the threat of an underage minor having a friend of legal age obtain a bottle of wine or beer exists anywhere, including the local supermarket or liquor store.

Planning commissioners were held up on the issue of if food and drink is served over the counter, what would stop an of-age customer later handing an alcoholic beverage to an underage consumer.

Yet another concern is the impacts of filling up a cup of beer from the Starbucks and then walking off with it into Tongva Park, to which the applicant stated they would make every effort possible to monitor alcohol on-site.

The commercial component of The Village called for about 20,000 square feet of retail space. Of that amount, the developer is entitled to fill 85 percent of that space with tenants who could serve alcohol.

According to an exhibit given to planning commissioners, the Starbucks Evenings menu includes food items such as: Grilled Vegetable Plate with Lemon Aioli Sauce; Parmesan-Crusted Chicken Skewers with Honey Dijon Sauce; Bacon-Wrapped Dates with Balsamic Glaze; Truffle Mac and Cheese; and, Chicken Sausage and Mushroom Flatbread, among other selections.

The price point for a beer order would, according to the applicant’s estimation, be about $7 to $8 while a glass of wine could range from $7 to $13. Beer would be served with a bottle and a glass.

Bottle service would not be allowed at the Santa Monica location.