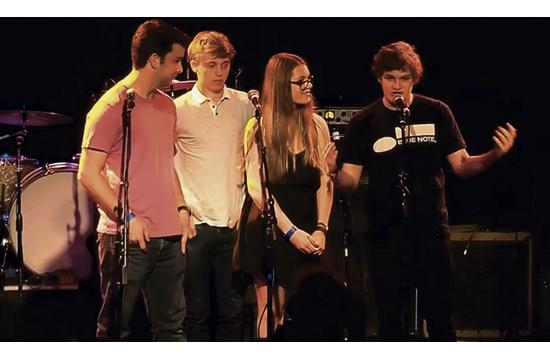 Four Crossroads seniors are reminding the community that age is but a number, and if anyone wants to make a change, then someone needs to step up.

Their backgrounds in music began at different ages and are inspired by different people, but all are fueled by a desire to help children get an education. Their organization, Teens United Live, which they founded when they were just freshmen, stages concerts starring musicians from local schools to raise money about issues that matter.

Alec Singer says, “When you think of a young kid who may be the next Miles Davis, but he can’t afford to change his squeaky mouth piece, you can’t help but want to do something.”

The idea is that by doing what they love, and getting others involved, they can make a difference. Taylor Mackall explains, “This is about taking everything we’ve learned about community and applying it in our lives.”

In 2013, it raised more than $20,000 for the Harmony Project, which lists its mission as building “healthier communities by investing in the positive development of children through music.”

This year will be the most exciting yet. There will be more than 95 musicians from 15 different schools from all over Los Angeles playing at the Moss Theatre in the Herb Alpert Education Village at New Roads School in Santa Monica on Saturday, Sept. 6.

These talented and giving students come from Crossroads, Harvard-Westlake, LACHSA, Colburn, LACES, Brentwood, Windward, Wildwood, and Campbell Hall. They will play an assortment of music, ranging from pop, jazz, blues, acoustic, and more.

Teens United Live is hoping to raise money for children’s education in the Lennox area due to cuts in funding, and social obstacles such as gangs.

All money will go to CEE, the Coalition for Engaged Education. This organization describes itself as “a social justice non-profit dedicated to spreading Paul Cummins engaged education philosophy and practices to diverse populations of youth.”

When asked who their influences were, Mackall responded, “We’ve been so grateful to have the education Crossroads has given us.”

The four leaders are currently applying to colleges and universities. It is likely that they will all continue to pursue music.

Even so, after they leave, the organization will live on. Crossroads juniors who are currently involved with Teens United Live will take over.

The concert will take place at 7 pm on Saturday, Sept. 6. The location is Moss Theater in the Herb Alpert Educational Village at New Roads School, 3131 Olympic Boulevard, Santa Monica, CA 90404.