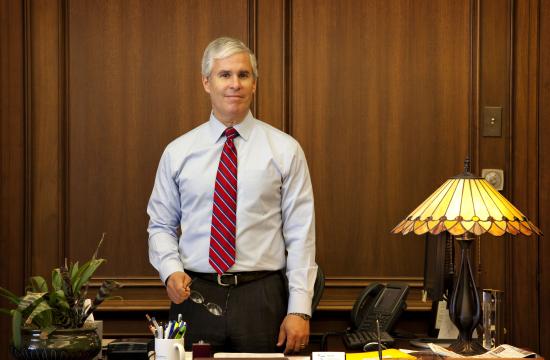 There will be at least one new face on the Council dais soon after the calendar flips to 2015, as Rod Gould announced late last Friday he is retiring from his post of City Manager at the end of January after five years of service.

With his retirement, Gould completed his fourth stint as a City Manager at municipalities up and down California, previously holding the position at Poway, San Rafael, and Monrovia.

In all, he has served as a City Manager for 23 years. He was also the Assistant City Manager of Walnut Creek for five years.

In his five years as City Manager, Santa Monica has seen the addition of a new $46 million park by the Civic Center, the development of several new housing projects, and the approval of two biennal budgets worth $1 billion each.

Through it all, Gould believes his time in Santa Monica has been his most memorable, mostly because the city of about 90,000 residents functions like a much bigger entity.

“Santa Monica stands out from all the other [places I served as City Manager] because of the breadth of the services and activities it undertakes,” Gould told The Mirror. “Santa Monica operates more like a medium-sized county in California. It’s a very different scale.”

Operating on a larger scale does not come without challenges.

In addition to enduring the Great Recession and the loss of highly-valued redevelopment funds – which Gould says Santa Monica has navigated “very well” – the City Council had to deal with “the external struggle” of the proper level of development during his five years as City Manager.

Earlier this year, a citizen-based referendum successfully led to the veto of the approved 765,000 square foot Hines development near Bergamot Station.

While just how much development is indeed acceptable will not be answered before his retirement takes effect in January 2015, Gould ultimately made it his everyday goal to make sure the City’s departments had the resources necessary to do their respective jobs and Santa Monica’s finances were properly managed.

Still, during Gould’s tenure as City Manager there were tangible and positive successes.

Though his successor would be in place before it is fully operational, the second phase of Metro’s Expo Line made significant progress into Santa Monica, with all bridges within the City completed and rail currently being installed.

For labor advocates, Gould served as City Manager as the council approved a $15.37 per hour living wage for certain employees, perhaps the highest such rate in the nation.

While Gould believes Santa Monica has grown quite a lot during his tenure, there is still a lot of uncertainty ahead.

Gould’s successor will have to deal with the future of Santa Monica Airport and the addition of new political parties such as Residocracy and SMCLC (Santa Monica Coalition for a Livable City). Neither group existed when Gould took the helm in 2010 but both spawned out of development-themed policies enacted by the City Council in the past four years.

Other major issues on tap for the next City Manager include the completion of the Expo Line and Colorado Esplanade, rebuilding the California Incline, what to do with the Bergamot Station area, and determining the future of the Civic Auditorium.

Just the same, Gould’s departure from the dais could coincide with at least one council member possibly not seeking re-election in November. Council member Bob Holbrook, who has served on the dais for 24 years – longer than any other council member in the City’s history – has hinted but not confirmed he might not seek an unprecedented sixth term.

Also, City Hall could be facing potential budget shortfalls during the next few years.

Still, he feels City Hall is in good hands with whoever is appointed to succeed his seat.

Once the transition is complete and a new City Manager is installed, Gould plans to follow through on a promise he made to his wife and allow her to determine the next city they would live. Right now, that destination appears to be in Marin County, just north of San Francisco.