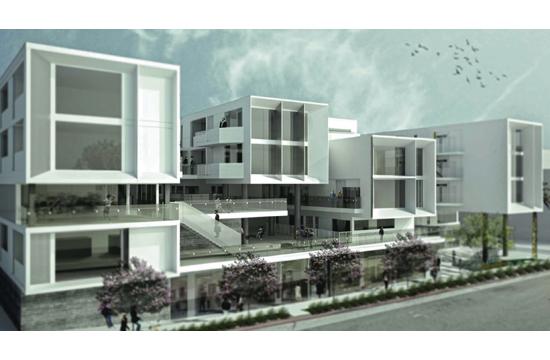 The developer behind the proposed replacement of Village Trailer Park presented updated plans at the Architectural Review Board (ARB) on Monday, addressing concerns raised earlier in the public process and telling board members certain design elements were “complete.”

Applicant Millennium Santa Monica LLC seeks to develop a mixed-use project proposing to bring 362 residential units and as much as 24,940 square feet of ground floor retail and production space at 2930 Colorado Avenue, which is the former site of the Village Trailer Park (VTP).

It was the second time Millennium Santa Monica came in front of the ARB within the past six weeks.

A short-handed ARB unanimously gave a conditional approval of some of the changes made to the proposed project. Millennium Santa Monica still has to come back to the ARB to make further changes of interior elevations and landscaping.

In a City staff report, it was noted that Millennium Santa Monica had made improvements to the proposed project since presenting to the ARB on July 7.

“The revised design was a substantial improvement from the previous design, particularly with the incorporation of a single-loaded corridor design and the revised Colorado elevation,” City staff told the ARB board in its report.

Other comments and suggestions from the July 7 ARB meeting included: a portion of the proposed project’s elevation was over-scaled and bulky; more work was needed on the street-level architectural development; rethink placement of transformers; create better access for bicycle parking; add large-scale trees; and, selectively and strategically reduce the project’s proposed floor area.

Some of the changes Millennium has since made in time for the Aug. 18 meeting included the removal of nine studios, two one-bedroom units, and one two-bedroom unit from proposed plans. The removal of the 12 units reportedly resulted in a total reduction of 6,395 square feet from the proposed project and met the ARB’s suggestion to reduced the proposed floor area.

“The removal of the units has made room for common area open space that is open to the sky and has allowed the applicant to address the key comment of strategic massing reductions to provide relief in the long East and West elevations of the project. The massing reductions are complemented by the use of accent colors and strategic extrusions of balconies in order to visually break up the elevations,” the City staff report stated.

Millennium Santa Monica did not update its proposed plans to accommodate the addition of larger trees, nor was the placement of the transformers moved. City staff stated the project’s access to utilities provided by Edison make moving the transformers difficult.

The size of the elevators was expanded to accommodate bicycles, according to City staff.

Other tweaks were made to some of the project’s aesthetic elements, such as stucco, steel, awnings, and the like.

City staff stated it believed the project’s landscaping appeared “less developed,” but a representative from Millennium Santa Monica told the ARB board the landscape design was “complete.”

During public testimony, the ARB was asked whether any seismic studies were conducted to determine if the proposed project was close to a fault line and the potential traffic and environment impacts.