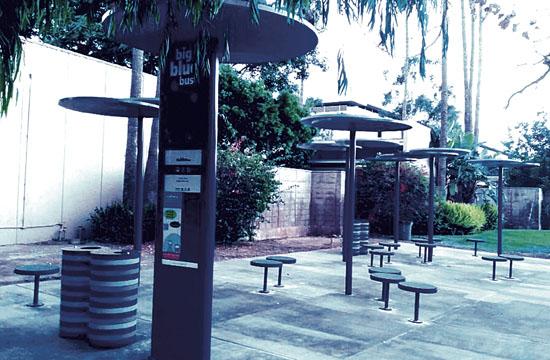 I want to offer my personal apologies to all the parties involved in the redesign of the Big Blue Bus stops, even though I’m likely to only add to the chorus of voices now bleating about the work.

Creating and executing any public space improvement or public art installation is often a thankless task, because everybody weighs in with their opinion after you are done. And… you did leave it out in public. Sure enough there’s now a review of the new bus stop designs, with intentions of adding different seating and creating more shade for those waiting for the bus.

The way our world looks and how that look impacts our relationship to the environments we live and work in has everything to do with how we and our children come to interpret beauty, how we might come to detest “sprawl”, and whether we even give a damn about the visual world around us.

Much as many of you might have simply asked “What’s with all this new blue stuff at the bus stops?” attempts to improve the aesthetics of a public fixture matter.

In the 10-plus years that I toured the country working as a stand-up comic (see “American Entertainers, Negligible Impact”), I was often struck with the sameness of cities and not in a good way.

Somebody from the comedy club would pick you up at the airport and during the drive into town we’d pass miles and miles of same-looking retail and fast food strips.

You’d become sad that so many cities in America have, at their outer suburban edges at least, the exact same blur of plastic signage and franchise pizza outlets. Then you’d get downtown, and there was the same “Old Town” area with the same Gap stores and coffee shops.

The Twilight Zone-esque feeling was often “Didn’t I gig this place last week?”

If the folks behind the new Big Blue Bus stop designs feel besieged, consider that as recently as last weekend Christopher Knight of the L.A. Times wrote a review starting on page one of how the two-year-old Grand Park downtown did or did not ‘work’ for the recent “Made In America” pop music event.

Renzo Piano’s design for the (I think, anyhow) magnificent and stimulating Centre Pompidou in Paris was reviewed this way in Le Figaro: “Paris has its own monster, just like the one in Loch Ness.”

Even Santa Monica had to be roused from a nap to save the very public Paul Conrad sculpture “Chain Reaction.” Deciding on any design element and then boldly affixing it in public takes courage and a willingness to see things through.

And you have to have guts if you’re going to fight what we might call the “Crunch”: The creeping and unsightly beast of commercial encroachment that too often becomes our visual world rather than being just a contained icky part of it.

Some recent projects have required that my own household make trips out to the desert.

Each journey includes long stretches of the 10 Freeway that are nothing but a Berlin Wall of retail signage and malls, fast food franchises, and gigantic car dealerships. Looking for some 21st century irony? Try being frozen in traffic and the only view out your window is of lots filled with new cars also not moving. Now I know that off the freeway behind all that there are people in possibly charming older homes and maybe public areas with new bus stop fixtures meant to enliven their urban landscape. But the sheer will and voracious appetite of the Crunch often seems as though it might spill onto the 10 and eat its prey.

Of late, some businesses sense that turning down the volume might serve their goals just as well as screaming circus colors and erupting signs.

A Chipotle Mexican Grill might strike you as a bit less garish than a McDonald’s, even if their prime directive is about the same. Yet franchise operations seem heavily invested in banana yellow and fire engine red paints and aren’t moving off that position soon. Add blinking LED marquees, electronic billboards, and those fan-powered dancing ghosts in front of car washes… and you hear the Crunch licking its lips.

So, can we please give a shout out to those who struggle with such things as making bus stops more visually involving and less banal? Truthfully, I didn’t see the practicality of the toadstool seats but I see how they integrated into an overall design. And while many may see the new bus stops as “failed”, there is no failure when something is part of an on-going effort to uplift and make more calming the journey our eyes make through this life. The Crunch has now claimed the Internet, where every page is littered with tiny ads that denigrate any effort to give a site a balanced look. How visually unpleasant (and rude) is it to read about the death of a beloved comedian while the photo array of “Eligible Singles in Your Area!” keeps flashing in your field of view. I’d much rather sit on a metal mushroom and wait for a bus than put up with that.