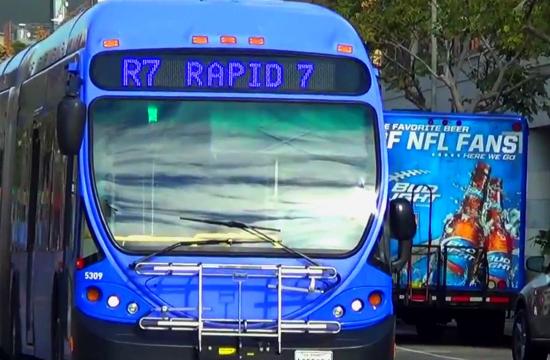 Santa Monica’s public transport system has been the focus of recent council attention with new funds allocated to improve the city’s services.

The seven buses are set to replace seven of BBB’S NABI buses purchased in 2002 that have been identified for replacement. The new CNG-powered buses are set to increase rider capacity by 126 seats – 18 seats per bus – which will help reduce overcrowding and heighten rider comfort, according to city staff.

The cost of the new transit buses will not exceed $6,825,464 and will be funded using federal or state grants as well as county transit sales tax funds. The total amount includes base bus, delivery, tax, spare parts and contingency.

The purpose of BBB’S piggyback on SDMTS’ contract agreement with New Flyer, is to speed up the purchasing and procuring process, as piggybacking allows an agency to purchase the same equipment through a procurement that it was not originally involved in, city staff said.

Santa Monica’s Big Blue Bus (BBB) has developed a capital improvement program that would regulate the replacement of aging buses as they pass their peaks of useful service. The purchase of the new buses is in line with the Federal Transit Administration (FTA) guidelines, as they set the serviceable life of a transit vehicle at 12 years.

A modification to the funding agreement, which extends the term of the agreement due to end Oct. 31, was also approved. Additional federal funds in the amount of $146,544 will go toward WISE & Healthy Aging, a California non-profit organization that operates the Door Through Door ride attendant services that the City of Santa Monica has been utilizing since July 2013.

The city entered into a Memorandum of Understanding (MOU) with LACMTA last year in order to provide three years of Door Through Door ride attendant services. New Freedom funds paid for the services in Year one, with $30,132 in federal funds awarded to WISE & Healthy Aging.

The contract modification and awarding of federal funds was considered financially necessary to continue providing Door Through Door services for the full 36 months proposed in the original application for New Freedom funds.