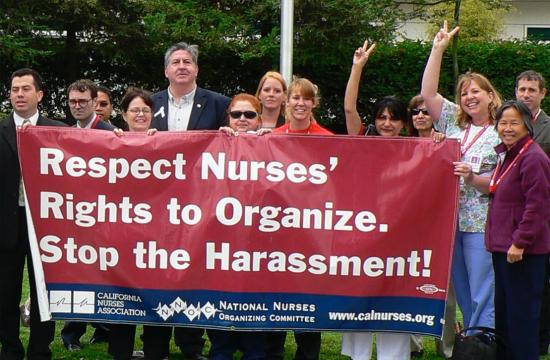 The California Nurses Association has endorsed the re-election of Santa Monica councilman Kevin McKeown at the Nov. 4 election where three seats are up for grabs.

The CNA, which represents nearly 75,000 registered nurses throughout the state, praised McKeown’s work on health, labor, and women’s issues; his long-standing support of single-payer healthcare; and his advocacy of campaign finance reform.

First elected in 1998, McKeown was one of the first elected officials to push for universal single-payer healthcare, strongly supporting then-State Senator Sheila Kuehl’s pioneering bill in the California legislature over ten years ago, in 2003.

He later had City staff calculate the savings single-payer would represent, which turned out to be more than $6 million annually in City of Santa Monica payroll costs alone.

McKeown stood by local nurses in a long struggle to gain union representation at St. John’s Health Center, one of two major hospitals in Santa Monica.

When negotiations with the former owners lagged, he intervened to help force recalcitrant management to the bargaining table to hammer out a fair and just contract.

“I’m proud to have the endorsement of one of the most selfless groups of workers in our world: nurses, who give of themselves to comfort the afflicted,” McKeown said. “I admire our nurses for their work, their commitment, and their progressive values.”

Jack Cline, a registered nurse at St. John’s Health Center, said no one understands support like a nurse.

“Our very job is to support patients through difficult times,” Cline said. “We know that Kevin will continue to support us, and the whole Santa Monica community, as a reliable progressive leader.”

The California Nurses Association endorsement adds to a growing string for McKeown, supported already by Santa Monicans for Renters’ Rights and also endorsed by the Santa Monica Coalition for a Livable City, the Santa Monica Democratic Club, and hotel workers’ and City employees’ unions.