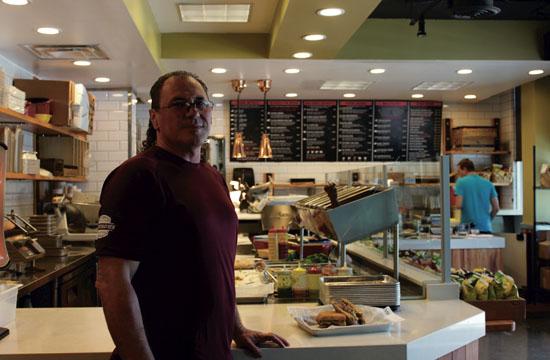 Carvery Kitchen, an eatery that delves into the art of the deli through a versatility of sandwiches, salads, wraps, and side dishes, recently opened its doors in Santa Monica at 3101 Ocean Park Boulevard.

This new restaurant not only boasts freshly made, meticulously prepared, and internationally inspired menu items, but also gives customers the unique opportunity to feast on a meal created by a legendary Soviet athlete.

The new restaurant is owned and cheffed by Roman Shishalovsky, who has a riveting personal history that helped enhance his endeavors as a professional chef.

Born in the Repubilc of Uzbekistan, Shishalovsky grew up during the Cold War and under communist rule, and due to a limited amount of opportunities, he took on various odd jobs, ultimately wound up as a wrestling champion of the Uzbekistan Republic, and is still regarded as one of the greatest Soviet wrestlers of all-time.

After starting a family, Shishalovsky sensibly gave up wrestling, but discovered a new passion that he dove into with the same energy and eagerness he had as an athlete.

Upon establishing what was then the most popular restaurant in Uzbekistan, he and his family traveled through parts of Europe as they made their permanent move to America, sampling varying styles of cuisine before settling down in Kansas City.

His dedication and zest for the culinary arts along with his various international experiences make for an ideal combination within his career as a chef.

Despite the initial language barrier, Shishalovsky moved to Los Angeles after two years working as a top-notch baker and breadmaker in Kansas City, with hopes of furthering his restaurant career.

Carvery Kitchen is the product of several successful experiences working at various restaurants in L.A., where he developed his sense of creativity by consistently inventing dishes.

Carvery Kitchen takes complete advantage of California’s bountiful, rich agriculture and incorporates a variety of meats into its menu options.

The restaurant seeks to utilize traditional recipes and culinary concepts like the French dip sandwich, but fuse them with unique flavors and textures.

The versatile spread that Carvery Kitchen offers is one worthy of noting: from housemade pastrami, to roast beef, to vegetarian alternatives, to even fish and crab, the restaurant goes above and beyond the standard chicken, pork, and beef options.

It’s also clear that Shishalovsky is putting his international experiences to good use, as the restaurant also features fare from all over the world. The menu includes a chicken caprese sandwich inspired by Italian ingredients, a Banh Mi porchetta derived from Vietnamese cuisine, and a puebla BBQ brisket sandwich influenced by Mexican eats.

“I thought about all demographics [when I created the menu],” Shishalovsky said. “I wanted to make [the ordering process] convenient and a pleasure for everybody.”

With the image of upscale, healthy fast food in mind, Shishalovsky set out to create a “fast-casual dining concept,” which essentially allows guests to order their meals in an easygoing, unpretentious setting, but at the same time also experience a tasty meal made with garden-fresh produce and roasted meats.

In fact, the restaurant’s slogan – “Roasted and Toasted” – derives from its signature and effective practice of slow-roasting its meats and vegetables.

“I had a dream of starting a restaurant that combined the elements of healthy, fresh, and tasty,” Shishalovsky said. “I wanted people to be happy eating this food and to crave this food.”

Carvery Kitchen seeks to reveal to the local Santa Monica community the delicious results of a hard-working chef’s food-centric passion.

With rave reviews already flowing in from both locals and visitors, it’s clear to see that making a visit to the Carvery Kitchen will be well worth the trip.

Carvery Kitchen is located at 3101 Ocean Park Blvd. Its hours are Monday through Saturday from 11 am to 8:30 pm (closed Sundays). For more information, call 310.450.0880 or visit carverykitchen.com.