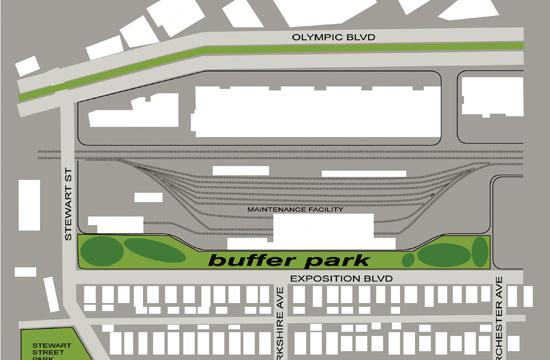 A recent funding grant will provide a huge amenities boost to current Buffer Park plans, thanks to an extended design contract awarded at the Santa Monica City Council meeting on Tuesday to encompass the improved facilities.

The design of Buffer Park was initiated late 2010 to create a buffer zone for the residential neighborhood along Exposition Boulevard at Stewart Street, adjacent to the Expo Maintenance Facility.

Community input emphasized the desire for a park with durable materials, large trees to help block noise from the maintenance facility, a variety of exercise options and good lighting and paving that was “nicer than gray concrete”.

The initial project budget was insufficient to meet all of these requested amenities and the park design was scaled back, according to city staff.

In July 2014, the city was awarded a grant in the amount of $2,139,850 for the Buffer Park project from the California Department of Housing and Community Development’s Housing-Related Parks Program.

The grant has made it possible to include amenities such as additional exercise equipment, larger trees and shrubs, higher quality paving, more durable light fixtures and aesthetically interesting fencing around the children’s play area and the Learning Garden, previously eliminated due to funding constraints.

Subsequent revisions to the construction documents require additional design services, with the Council awarding a design modification in the amount of $50,413 to current project designers Mia Lehrer and Associates to enable the new budget to be incorporated.

The modification results in a two-year amended agreement with Mia Lehrer and Associates for a new total not to exceed $360,868.

City staff have been working with the community on design elements since the initiatives’ inception.

The Pico Neighborhood Association hosted the first community workshop to solicit feedback on potential uses for the zone.

A second community workshop was held Nov. 29, 2011, with city staff working with the community to envision and prioritize the desired amenities.

There was a strong and consistent desire for vegetation and tree-based screens from the maintenance facility with all discussion groups requesting a community garden.

Other amenities highly desired by the neighborhood are beautiful pathways and vandal resistant lighting.

If all goes as planned, construction of the new 2.35-acre Buffer Park will start in April 2015, when the Expo Maintenance Facility is expected to be complete.

A design team has been allocated to breathe new life into Reed and Ozone parks, with funding directed to encompass the inclusion of aesthetic and functional improvements.

The Council voted to award the design contract to Katherine Spitz Associates (KSA), with a total allocation of $116,000 to complete the design works.

Through a community process, best uses for the area north of Miles Playhouse at Reed Park will be explored, including consideration of drought-tolerant landscaping and water efficient irrigation.

Ozone Park requires updated equipment and materials improving safety and accessibility, according to a city report.

City staff said that improvements will include playground equipment selection at Ozone Park and potential programmatic uses for open space at Reed Park, in addition to drought-tolerant landscaping and irrigation.

New playground equipment installed at Ozone Park will be universally accessible; however, funds are insufficient to replace the entire playground. Staff and KSA will gather feedback on the improvements through a community process.

The design process will include community workshops, coordination with the Recreation & Parks Commission as well as review by advisory and regulatory bodies such as the Coastal Commission and City Council.

Ozone Park is located at 720 Ozone Street and Reed Park on Seventh and Wilshire.