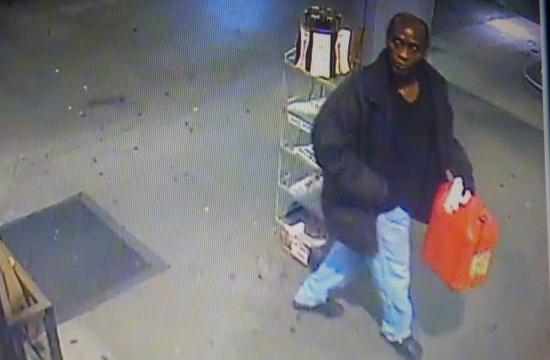 Santa Monica police have released surveillance footage of a man they believe responsible for an arson attack Wednesday night that completely destroyed four luxury BMWs and damaged others on the lot in the amount of $250,000 at a popular car dealership in Santa Monica.

Camarena said a suspect was arrested in the vicinity of the 1100 block Santa Monica Boulevard at 11:10 pm Wednesday, but was released on Thursday.

“Evidence indicates he is not the suspect,” Camarena said.

He said a suspect matching the general physical and clothing description consistent with witness accounts was seen at 10:21 pm Wednesday purchasing $4 worth of gas, which was poured into a red gas can at a gas station in the 1300 block of Santa Monica Blvd.

BMW dealership owner Del Montell Snr. explained that the incident was unexpected, but not entirely unanticipated.

“When you have this many cars out, there are a lot of crazy folks out there, this is just part of doing business,” he said.

He said that his first instinct was to rule out a personal attack.

“There’s always that thought that there’s something wrong with servicing their car or they’re mad at a salesperson or manager or something like that,” he said.

Montell estimated the loss at $250,000, not including what he could have sold the cars for and what the salesperson could have made.

“We have insurance, we have deductible, so it won’t cost us that much, but it’s a fairly substantial loss,” he added.

There are security cameras fitted throughout the dealership and the lot is chained at night. Montell said that incidents are rare, the last one being a homeless person throwing acid on some vehicles quite some time ago.

Opening in 2000 at its present location, Santa Monica BMW stands on the corner of Santa Monica Boulevard and 12th Street. The business has been operating in Santa Monica for 32 years and has a longstanding position in the local community.

“It always can be a lot worse,” Montell concluded. “No-one’s been hurt.”

Anyone with information is encouraged to call the Santa Monica Police Department at 310.458.8491.