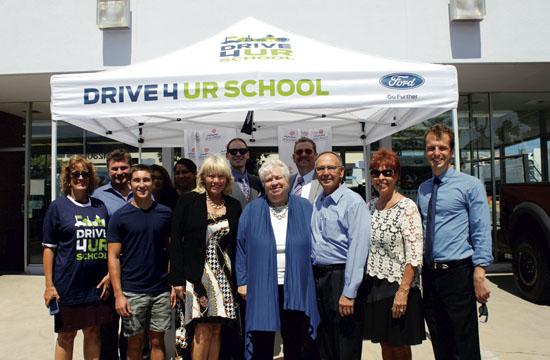 Ford Motor Company has made the implausible possible through a win-win situation. Each year, Santa Monica community members have the opportunity to help contribute to worthy causes simply by test-driving a new vehicle at the Ford dealership on Lincoln Blvd.

On Thursday, Aug. 21 from 11 am to 5 pm, Santa Monica Ford Lincoln teamed up with the Santa Monica Chamber of Commerce to take advantage of the “Drive 4 UR School” program sponsored by Ford Motor Company.

For every test drive that was completed at the Ford dealership, $20 was donated to go toward funding school activities and events.

In this case, the money raised and received from Ford was directed to the Santa Monica Chamber of Commerce Foundation, which is the organization that in turn funds educational projects.

This year, a special guest participated in this generous cause. Santa Monica mayor Pam O’ Connor was able to meet and greet the Ford representatives and the on-site Chamber members as well as test-drive a vehicle herself.

Ron Davis, owner of Santa Monica Ford, explained the process of this clever, effective fundraiser in which more than one party benefits.

“We contribute $20 to a charity for every test drive,” Davis said. “This time we’ll be donating to the Chamber of Commerce Foundation here in Santa Monica, and the money will end up helping local schools.”

Davis said that the dealership has taken part in “Drive 4 UR School” initiative twice annually for the past three years.

“We usually have a pretty good turnout and end up raising a lot of funds, up to several thousand dollars,” Davis said. “We promoted this event pretty heavily through the dealership as well as through the Chamber of Commerce.”

Santa Monica Ford has partnered with the Santa Monica-Malibu Unified School District (SMMUSD) in the past, as well as with Harvest Home in Venice.

This year, the Santa Monica Chamber of Commerce Foundation will be allocating the raised funds appropriately as the recipient of the monetary contributions.

Linda “Tish” Tisherman, current chair of the education committee at the Chamber, emphasized the fact the unbelievably beneficial nature of this fundraiser, as there is no need for contributors to open their wallets, swipe any cards, or sign any checks. Because each person can do two test drives maximum, every test-driver has the potential to help donate $40 to the cause by performing an easy and enjoyable task: choosing one of Ford’s latest models to drive around the block.

“It’s a great opportunity to try driving a couple of cars that maybe you wouldn’t even think about driving,” Tisherman said. “You get to give back to the community at the same time, and you don’t even have to put your hand in your pocket to do it.”

Each test drive lasted about seven to 10 minutes, and each test-driver had to present a valid driver’s license to the program coordinators.

Tisherman has helped with “Drive 4 UR School” in the past and gives forth her best effort to make sure that this one-of-a-kind fundraiser is utilized to its full potential.

The final tally for the amount raised on the day for the Foundation was $1,400.