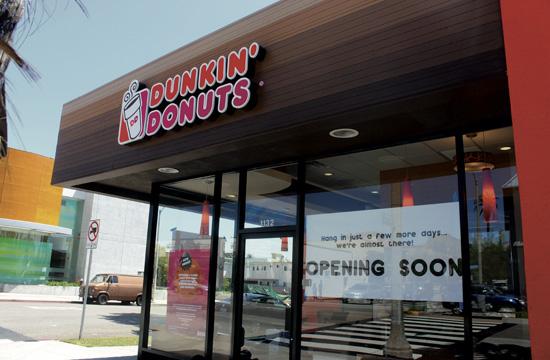 Some economists would tell you there is no such thing as a free lunch. Surely economists would apply the same academic rule to a free cup of coffee. Still, the first person to walk into Dunkin’ Donuts’ newest location in Santa Monica will receive free coffee for an entire 12 months. Whoever this person is would definitely accept the free coffee offer without giving second thought to its “economic cost.”

Indeed, the Santa Monica location of Dunkin’ Donuts will officially open its doors this Tuesday, Sept. 2, at 5 am. The very first person in line will be rewarded with free coffee for an entire year.

For the next 99 people walking into the newest Dunkin’ Donuts shop on the corner of Wilshire Boulevard and 12th Street will not walk home without a gift, as the Santa Monica store will be giving these guests in line a tote bag stuffed with swag.

Of course, not everything comes with a price tag reading $0.00. Dunkin’ Donuts’ Santa Monica store will also be offering limited edition mugs, T-shirts, and beach towels for purchase, in addition to its full menu offerings.

The Sept. 2 opening in Santa Monica marks the first “traditional” Dunkin’ Donuts to turn on its lights in Southern California.

News reports indicate a second Dunkin’ Donuts could be coming to Santa Monica, with a handful of other locations opening across the West Los Angeles region.

Other Dunkin’ Donuts locations are already in the works in Downey, Long Beach, and Whittier. A Dunkin’ Donuts store opened its doors in the Central Valley town of Modesto on Aug. 26.

Based in Canton, Mass., under the banner of Dunkin’ Brands, the Dunkin’ Donuts franchise reportedly has more than 7,700 locations across the United States. The company, which has a very popular following in the American Northeast, announced plans to open about 1,000 Dunkin’ Donuts across California.

While the Santa Monica location is considered a “traditional” store, the Dunkin’ Donuts brand has already made a few in roads within California since the company announced its plans to expand to the West Coast.

However, all three are considered “nontraditional” stores as they are not freestanding but instead located within a hotel in San Diego, a travel stop in Barstow, and a military base at Camp Pendleton.

Located at 1132 Wilshire Boulevard and within viewing distance of a Krispy Kreme, Dunkin’ Donuts will be open daily (as of Sept. 2) from 5 am to 11 pm.

The Santa Monica store is also hiring. For available opportunities and how to apply, www.dunkindonuts.com/careers.

Santa Monica has recently become a destination for many major or mainstream brands. Starbucks recently opened a new location across the street from City Hall, with another store coming along at the corner of Pico and Lincoln boulevards. The social media brand Twitter announced it is setting up offices in Santa Monica. Fuddruckers, a national hamburger chain, confirmed on its social media pages it would be opening its Santa Monica location sometime in the fall.

Dunkin’ Donuts was founded in 1950. The restaurant specializes in selling donuts, coffee, bagels, and breakfast sandwiches.

Predominantly located in the northeastern United States, Dunkin’ Donuts, whose current slogan is “America Runs on Dunkin’,” is also expected to expand into Arizona, Nevada, New Mexico, and Texas, according to reports.

This is Dunkin’ Donuts’ second attempt to enter the West Coast market.