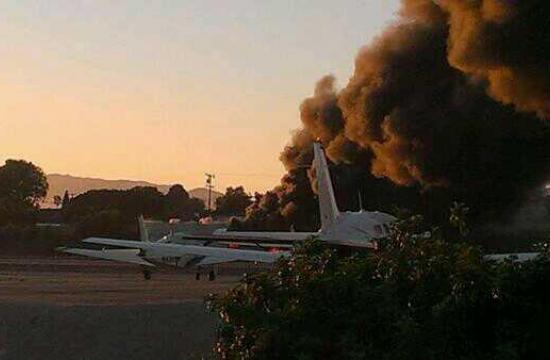 The parents of a young woman killed in the crash of a small plane at Santa Monica Airport a year ago today are suing the heirs of the pilot of the aircraft, the aircraft’s manufacturer and three government entities.

Gary and Carole Winkler of Irvine, the father and mother of Lauren Winkler, filed the wrongful death suit Friday in Los Angeles Superior Court against the estate of Mark Benjamin, the cities of Santa Monica and Los Angeles, Los Angeles County and Cessna Aircraft Co, maker of the 525A Citation that crashed.

The suit seeks unspecified damages. Robert Given, the personal representative of the Benjamin estate, could not be immediately reached.

According to the lawsuit, Benjamin negligently landed the aircraft in a “dangerous, unsafe and reckless manner” that caused it to veer right from the runway and hit a hangar. The suit also alleges Benjamin was “physically, mentally and emotionally unfit to operate” the plane.

The plane had possible problems, including its braking system, landing gears and thrust attenuators, all of which may have caused Benjamin to be unable to control the aircraft, the suit states.

The two cities and the county were jointly responsible for the runway being in a dangerous condition, which included the presence of rocks and other materials on the pavement, the suit states. There also was insufficient space for Benjamin to steer the aircraft until he regained control, the suit states.

The hangar struck by the plane was built too close to the runway to be safe, the complaint further alleges.

A report released last year by the National Transportation Safety Board found that all of the tires were inflated and there was no debris on the runway when the plane slammed into the hangar and burst into flames. The hangar collapsed onto the plane, which had taken off from Hailey, Idaho.

Charles Dupont, Elliot Dupont and Jackson Dupont allege Benjamin failed to maintain proper control over the plane, did not act “reasonably in the ownership of the plane,” did not undertake the necessary actions to accomplish a safe flight, did not act reasonably in landing the plane and failed to keep it in good repair.