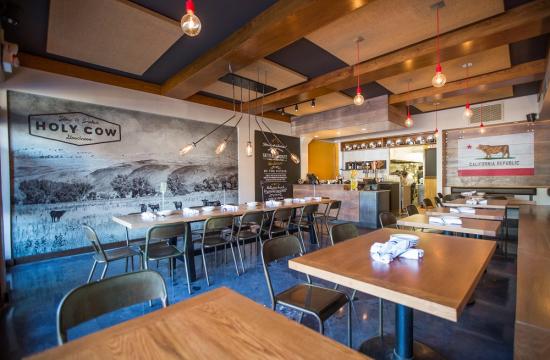 For Holy Cow founder Rob Serritella, the opening earlier this month of his new BBQ restaurant opposite the Brentwood Country Mart is the result of a love affair with slow cooked meats that dates back to his teenage years.

It was during a “wear a raincoat to eat our ribs” promotion at one of his first jobs that cemented his love of ribs and barbecued meats that led him on a 20-year culinary mission where he traveled and sampled BBQ across the U.S. whenever he had time to travel.

He said he has tried dry rubs, wet rubs, and all the variations in between; observed smoking techniques, roasting methods, slicing secrets, and just about every sauce ingredient you can imagine.

The opening of Holy Cow is thanks to Serritella and his team behind the popular Messhall Kitchen in Los Feliz.

“It’s funny how you find the name that you think it’s just right for your restaurant, it’s almost like naming a baby – once that’s it, that’s it,” Serritella said. “Holy Cow is an expression I use a bunch. I remember when we were tinkering with the project some time ago and I pulled my first brisket out of the smoker – thinking ‘Holy Cow’ this is delicious – that’s when I think the name stuck.”

Serritella said L.A. was a great place for BBQ with lots of styles and interpretations.

“It’s not quite Memphis, but it’s getting better,” he said. “There are definitely some joints that have it right.”

He said BBQ had always been one of those foods for him that just made him feel good and even better after he’d eaten it.

“It brings people together and goes with just about any occasion,” he said. “Every guy or gal with a fork, tong, or brush can do their thing just the way they please – I think the smell of the smoke is the magic.”

As far as Holy Cow’s menu, Serritella said he looked at what other establishments were doing around the country.

“We tried to take the best things from places that do BBQ best like Texas, Memphis, Georgia, and the Carolina’s – not necessarily stick with one particular method, just what we felt people would enjoy the best,” he said. “I’ve been a tri-tip guy ever since my first trip to Santa Maria. I like the flavor, and the fact that because of the slower cooking method needed, you really can get the optimum flavor and tenderness out of this cut. It works stand alone, in a sandwich, or on a salad. We like to cook ours for at least 15 hours so it’s so tender you really don’t even need a knife.”

He said the idea of opening a BBQ restaurant had been on his mind for more years than he’d like to admit.

“I’m blessed to be able to bring this idea to a reality and finally taste and serve the goods I’ve been talking about all of these years,” he said. “I’m proud of the team and the product we serve.”

Among the menu highlights is the house brisket (Texas), tri-tip (Santa Maria), pulled pork (Carolina), and baby back ribs (Memphis, Kansas City) to specialties like the Prairie Dog (Louisiana Hot Link) and El Jefe (L.A.’s own).

Holy Cow is located at 264 26th Street (across from Brentwood Country Mart), Santa Monica. It is open daily from 5 pm, but lunch service is expected to start in the coming weeks.