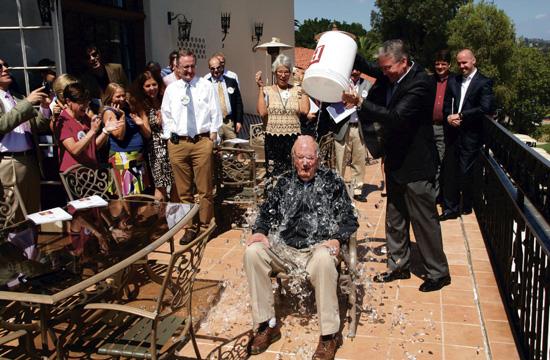 The Sept. 19 meeting was particularly eventful. The weekly gathering commenced with a group sing-a-long, as the Rotarians livened up the atmosphere by collectively crooning “America the Beautiful” and “We Are The World.”

The meeting then introduced visiting Rotarians, including special guests from Europe: Geoff Hunt from Coventry, England, and Hatto and Ursula Brand from Westheim, Germany.

The ensuing announcements given by Timur Berberoglu and Sharon Perlmutter Gavin, reminded Rotarians about the First Annual Rotary Function (FARF) on Sept. 28 in Topanga at the Young residence and the Feed the Homeless event on Sept. 30 at OPCC Turning Point in Santa Monica.

Len Lanzi went on to give a presentation on the finances of the Santa Monica Rotary Club, leading the meeting into his report on the philanthropic projects that the club has funded both locally and internationally.

Lanzi posed a question to the Rotarians: “How much money do we give annually?”

He began his report by explaining that the club’s funds come from the members’ “fines” – essentially pledges given at the beginning of the year – and the annual wine festival, which is set to take place Oct. 19.

Lanzi elaborated on the international projects that the Rotarians have contributed to including a well for the Myanmar Water Project, testing and counseling thousands of people for HIV in Africa, covering costs of polio surgeries in India, and providing electricity for a village in Colombia.

Currently, the Rotarians are planning their humanitarian trip to Guatemala. A $10,000 grant has been allocated to fund various causes like literacy and water treatment.

By a show of hands, Lanzi estimated that “over a third of the club” was directly involved with where funds were going. He encouraged more participation in such projects.

“Getting involved can be your Rotary moment,” Lanzi said. “Be proud of what you do. Serve above self.”

Wrapping up the meeting, President Collins, dressed in casual wear, was doused by Rick Ruby with a bucket of icy-cold water. Collins was nominated for the popular Ice Bucket Challenge to raise money and awareness for ALS by Chief of Fire Scott Ferguson.