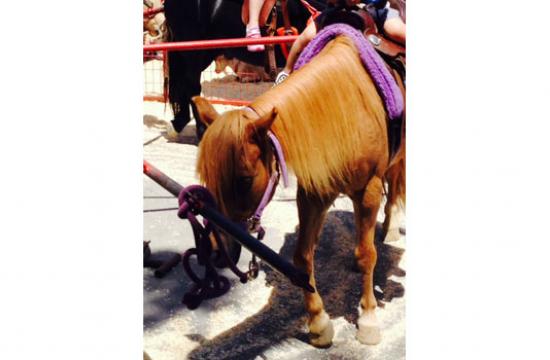 I want to thank the Santa Monica City Council for moving forward with a compassionate heart recently, when it voted to instruct city staff to explore more spacious park-line venues for our animal friends now displayed like pieces of equipment at the Main Street Farmers Market.

Each Sunday, a few blocks from my Ocean Park home, six ponies routinely plod, butt to nose, tethered to a metal bar, circling on hot concrete for hours, while car exhaust spews in their face and a band plays next to their sensitive ears. Adjacent to the tethered ponies, an alpaca and zebu are tightly penned at the petting zoo, where chickens sometimes scurry to the corners for refuge from the crowds.

In addition to asking staff to explore more spacious venues, the council also voted to open up a bidding process that has been closed for over a decade, with automatic renewals granted to the pony ride operator – this despite the fact that in 2005 a young couple collected over a 1,000 petition signatures from market patrons disturbed by the animal exploitation.

In casting their votes, the council took into consideration that over 1,400 people – many notable Santa Monica leaders and residents – recently signed a Move On petition, calling for the closure of the Main Street market’s animal exhibits. Additionally, the council welcomed family-oriented vendors specializing in the arts, cooking and gardening to apply to teach our children how to make organic dishes, paint seascapes, and plant gardens – all at the entrance to the market, where nowadays local residents must give tacit approval to animal enslavement when they step foot on the grounds.

Despite repeated efforts to silence me and the others who object to these animal spectacles, despite efforts by the vendor to photograph petition signers, even follow some of them through the market, animal welfare champions forged on to make the community market a kinder and gentler place.

A nearby animal sanctuary has offered refuge to two of the tethered ponies and a local resident has offered to take the other four. Additionally, I have offered to help the pony ride operator establish a non-profit rescue sanctuary on their expansive acreage in Fillmore. I have even offered to financially contribute to such a sanctuary, as I think this carries the hope of real education for children – seeing animals, not tethered or trapped, but in a more natural setting, where they have freedom of movement.

I am a public school special education teacher and have worked with at risk youth for 20 years. I take seriously what we model for children and believe we can introduce our youth to animals, so precious and important, in much healthier ways.

I commend the Santa Monica City Council for listening to the deeply felt concerns of residents in my neighborhood and beyond – and for showing empathy for the voiceless among us.

It is time to heal.