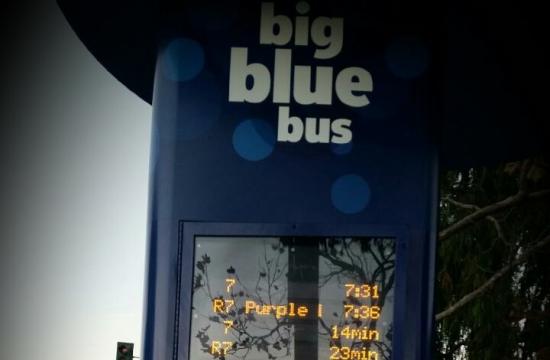 The previous 50 stops already completed had the project’s low-volume design, intended to enhance locations with fewer than 50 daily passenger boardings with new seating and an identifying canopy.

The first two stops to open with the high-volume treatment will be on both sides of Pico and 18th Street, which is utilized heavily by students from Santa Monica College (SMC).

At these stops, BBB has installed a larger sign unit for the display of route maps and real time signage which will show the predicted real-time arrival information for the next three buses, along with their route number and destination.

The stops at SMC are also the first of the medium and high-volume stops to open since BBB announced the changes it was making to the project design. The redesign of the double seat is not complete, so the SMC stops will receive single seats in the interim.

BBB plans to open an additional group of medium and high-volume stops early in September:

· Lincoln at Pico (southbound, toward LAX)

BBB will be installing solar-powered lighting at these locations, and a real-time sign at Lincoln at Pico (southbound).

The BBB Bus Stop Improvement Project was launched to enhance the bus rider experience and encourage the use of mass transit. For up-to-date project information, visit http://bigbluebus.com/bsip. To receive project updates by email, subscribe by visiting http://www.bit.ly/BSIPemailsubscribe.