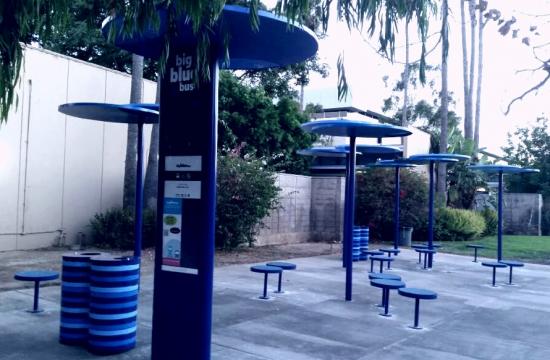 The redesign of Big Blue Bus’ double-seat unit is underway with anticipated modifications to the seat size, spacing, and the arm/back configurations.

BBB said redesigned double-seats would be installed at bus stop locations and positioned to maximize driver and rider sight lines.

“Updated double-seats will also replace most of the single and original double-seats installed at stops constructed to-date,” BBB said in a statement. “To accommodate more riders, high volume stops may receive the full range of seating units which will include the original and updated double-seats as well as single seats.”

Additionally, BBB said the refuse bins would be redesigned with enlarged openings to facilitate deposits of to-go boxes and other larger items.

“All new locations will receive the new bins, while previously installed bins will be updated with the larger openings,” BBB said.

BBB has already announced that in response to feedback from the community, the design of low volume stops will be modified where feasible to include shade structures, more accommodating seat design and placement of refuse bins so that sight lines are not blocked.

While the low volume stops were not originally intended to include shade structures, Public Works and BBB staff said they were reviewing locations to determine if a shade structure can fit in the sidewalk without obstructing local businesses and disrupting existing infrastructure.

· Wilshire at 26th in both directions

Other modifications under consideration include using six-foot discs in lieu of the five-foot discs to match the medium and high volume stops.