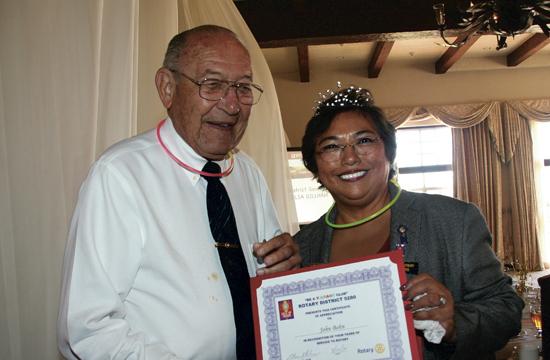 The Rotary Club of Santa Monica emanated particularly brightly in its meeting room at the Riviera Country Club last Friday, Sept. 12. in honor of Rotary District 5280 governor Elsa Gillham’s special appearance at this week’s meeting. Club members took to highlighting the district’s theme – “Light Up Rotary” – and playfully donned glow sticks throughout the meeting on their heads, wrists, and necks.

The room certainly was lit up with the bright neons of the glowsticks and even brighter personalities and hearts, as the chipper Rotarians chimed in to the usual introductory songs that kick off the weekly meetings on a cheerful note.

With an encouraging invocation by PR guru Barbara Bishop and guest introductions by Vlado Valkof, members welcomed Elsa Gillham’s husband Larry Gillham to the head table and went on to croon a version of “Hail to the Chief” penned especially for the district governor herself.

Santa Monica Rotarians were also notified that their second annual blood drive, which took place this past Monday, Sept. 15, was completely booked and therefore completely set to make a difference in the lives of those who need blood.

Elsa Gillham took to the podium and proceeded to continue the meeting with a motivational speech of her own. Each round table at the meeting was crowned with an eye-catching, silver balloon, all in the shape of the letters that make up the word “vibrant.”

Gillham chose the word “vibrant” as the focal point of her presentation, using the district president’s utilization of a Confucian quote to describe Rotary’s work in the world: “It is better to light one small candle than to curse the darkness.”

With this quote as the backdrop, Gillham continued on to state that “Light Up Rotary” went beyond serving a mere theme.

“It is how we live, how we think, how we feel, and how we work,” Gillham said. “[President George] wants our light to be warm and inviting so other people would like to be a part of it […] We light up Rotary by being vibrant clubs.”

Gillham elaborated on the idea that the word “vibrant” as an acronym represents an action plan. For instance, the first letter V stands for the visibility of club in the community, as “a Rotary club without an active public relations program is like waving to a friend in the dark.”

Gillham emphasized the need to keep the local public aware of the services that the Santa Monica Rotary club does. In order to accomplish this, the “I” in “vibrant” – involvement of members – is a necessity.

Gillham took the time to recognize Rotarian John Bohn, who stands as an ideal representation of active and meaningful club involvement. Bohn has been a member of the Santa Monica Rotary Club since 1955. When asked why he renews his membership every year, he was met with laughter and cheers as he answered: “We have more fun than anyone else.”

The “B” in “vibrant” stands for bigger, bolder, and better projects, from as local as diaper drives to as international as humanitarian trips. Gillham spotlighted club member Karim Jaude as the most involved with club projects within the last year.

The next letter “R” stands for “reaching out to recruit and retain members,” which has been the district’s biggest challenge, according to Gillham, as she encouraged the club to make recruitment a major focus. Rotarians LaVonne Lawson, Judy Neveau, and Dick Lawrence were all recognized as they three-way tied for bringing in the most members within the past year.

Gillham also encouraged some of the veteran members to serve as mentors to new members as she explained that the “A” in “vibrant” stands for the “advancement and training of club members.” She then proceeded to the letter “N,” describing its representation of “never-ending fun” as “what the Santa Monica club already knows.”

To conclude, the “T” in vibrant stood for the Rotary Foundation’s support, which is a basis that all Rotary clubs know and need. Member Robert Siegel was congratulated as the biggest supporter and largest contributor of the Santa Monica branch.

Though after her enlightening speech, a bucket of confetti was poured on top of Gillham’s head as a playful version of the Ice Bucket Challenge for ALS, President George Collins will be participating in the actual Challenge during today’s meeting.