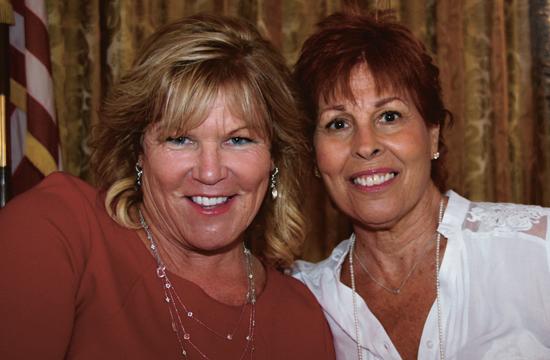 The walls of the Riviera Country Club were once again filled with cheery laughs, philanthropic announcements, and an educational presentation on Friday, Sept. 5.

With Jillian Alexander and Andrea Gressinger serving as the greeters, Rotarians were pleasantly received as soon as they entered the meeting room.

New members like Bill Powell and Abby Fernandez, who is a fourth-generation Rotarian, were especially warmly welcomed by both President George Collins and their fellow Rotarians with a hearty welcome song.

Though tunes like the patriotic “America the Beautiful” and the lighthearted “Pacific Park (Palisades Park)” kicked off the meeting as usual, a special guest appearance by Linda Jackson from the LA Opera made the standard weekly songs a bit brighter as she assisted Matt Williams in leading the sing-a-long with her awe-inducing voice.

Jackson later went on to receive a grant from the Rotary Club of Santa Monica with much gratitude. The grant is to help fund the endeavors of the LA Opera.

“We needed [this grant] very, very much,” Jackson said. “We need to bring our own lighting to all of our own venues, and your grant has enabled us to buy a couple of stage lights that make a big difference.

As far as other important announcements go, Sharon Perlmutter Gavin told the Rotarians about the opportunity to help feed the homeless at OPCC, which is set to take place on Sept. 30.

Tisherman went on to introduce this week’s guest speaker: Mary Ann Powell, the CEO and general manager of the famous Pacific Park on the Santa Monica Pier.

Powell informed the audience about interesting, little-known facts about the widely visited amusement park, including its recent history and current activities. She provided the Rotarians with an attention-grabbing video clip that chronicled the Pier’s Ferris wheel makeover, emphasizing the significance of the replacement of the wheel.

What with the historical weight that the previous Ferris wheel held, it was a monumental event when the current, newly constructed wheel was revealed. Comedic clips poking fun at the eBay sale of the old Ferris wheel were compiled and incorporated into the video, evoking laughter through the meeting room.

Powell also educated her listeners with a brief history lesson about how Pacific Park came to be, with the pier opening back in 1909 and the Great Depression causing a downturn in the 1930s. Rotarians were moved to hear that though the city council back then deemed that the Pier should be torn down, Santa Monica citizens adamantly “stood up and said no.”

Powell then transitioned into a partnership that the Pacific Park staff proudly maintains.

“I want to talk for a few minutes about an organization that is very near and dear to my heart, which is the Special Olympics, an event that is coming to Los Angeles in 2015,” Powell said.

She again used the effective presentation method of visuals as she aired a clip about the Special Olympics and the impact that the sports have on its participants in order to create a clearer understanding about the event among the Rotarians.

The members of the Rotary Club of Santa Monica undoubtedly left the country club with a much more informed view of their city’s beloved pier and renowned Pacific Park.

For more information about the Rotary Club of Santa Monica, visit rotaryclubofsantamonica.org.