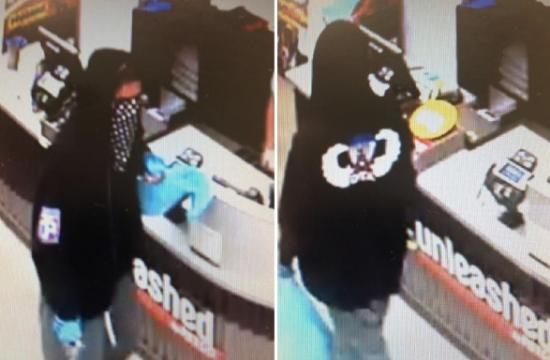 Police on Thursday circulated surveillance images of a masked gunman who robbed a pet store in Culver City.

The suspect, masked by a black bandana with a white skull and crossbones pattern, entered the Petco Unleashed store at 13411 Washington Blvd. about 8:40 p.m. on Sept. 18, pointed a silver revolver at the cashier and demanded all the money in the register, according to Culver City police.

The cashier complied, and the suspect fled through the parking lot toward Glencoe Avenue.

The suspect was described as white and 6 feet tall, with a thin build.

He was carrying a blue fabric shopping bag that was sold at a nearby Albertsons supermarket and was wearing a black Army Airborne sweatshirt, gray sweatpants and Chuck Taylor-style Converse sneakers.

Anyone with information that could aid the robbery investigation was urged to contact Culver City police at 310.253.6202.