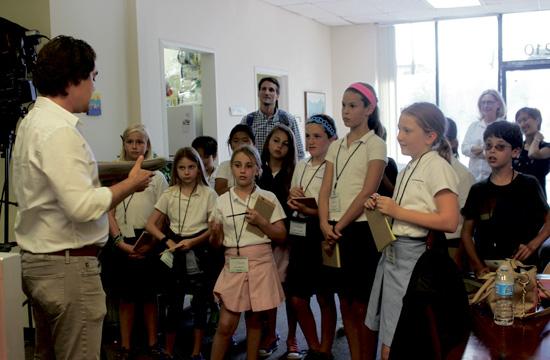 The Mirror Media Group this week hosted a talented group of young journalists, eager to learn more about the role that local media plays in the community.

A total of 12 fifth-grade kids aged 11 and 12 visited Mirror Media Group offices in Ocean Park on Tuesday and received an inside look at what goes on behind the scenes.

“This was a great opportunity for the kids to do community investigation and exploration,” explained David Snow, co-founder and director of KidUnity, organizers of the event. “They got to ask some great questions: ‘What are some of the big issues?’, ‘What’s the role of the media in the local community?’ and to engage in and learn some really fun behind-the-scenes stuff.”

“Through innovative, fun, and engaging programs, our aim is to inspire and prepare students for a lifetime of service and leadership,” Snow explained.

Community leaders Laurel Rosen, CEO of Santa Monica Chamber of Commerce and Ben Allen, Board of Education member with SMMUSD came to Tuesday’s event to be interviewed by the kids alongside Mirror Media Group owner T.J. Montemer.

“I always get really energized when I am around young children,” Rosen said. “The opportunities, the idea of the world in front of them and this great adventure they’re on, it always makes me really happy.”

Ben Allen was part of early discussions prior to the launch of the extra-curricula program and said it was great to see everything come to fruition and to watch the kids have so much fun while learning about community issues.

“Hopefully it’s going to give them a window into the broader community,” he said. “They’re getting some exposure to this bigger community out there and that’s really neat.”

While at the Mirror Media Group offices, the students watched the in-studio filming of Westside TV with a few of them having a go themselves in front of the camera. They then looked on as staff edited the footage into a cool, on-air story.

The kids also learned some great secrets behind the art of news reporting and after taking copious notes, interviewing and recording their experiences, they are now in the process of collaborating on an article that will be published in a future edition of The Mirror.

“It’d be exciting to see my writing that I’ve worked on with everyone here turn into one big article,” exclaimed young participant Noah Wexler from Pali Elementary. “I learned how to report and how to use quotes.”

“It was really interesting for me because I didn’t know any of that before,” added Catherine Hou from Carlthorp School in Santa Monica. “I learned that you have to take good notes and learn about what topic you’re writing about.”

Next week, the students are scheduled to learn about corporate social responsibility. They will visit California Pizza Kitchen to learn about the company’s national anti-bullying efforts. The students will then make pizza with the CPK chef and deliver them to a homeless shelter for families with children where they will organize a pizza party.

“We believe it is imperative that the next generation has a strong foundation in service and civics,” said Snow. “Like any other discipline – from academics to athletics – these skills need to be emphasized, developed and strengthened from an early age.”

Snow explained that KidUnity grew out of co-founder Peter Sheehy’s experience as an educator and his passion for service learning and his own work with Upward Bound House – a Santa Monica-based homeless shelter for families.

“I often received calls from parents looking for volunteer opportunities for their children. It was clear from these calls that there was un-met demand for age-appropriate, convenient and curated programs for kids and families.”