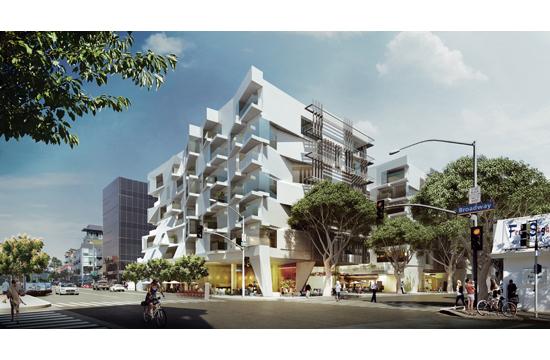 Plans for the downtown Santa Monica block bordering Broadway and 5th Street have been approved for review, with City Council voting Tuesday to move forward with the development process for the site.

The applicant for development, DK Broadway, proposed that the City consider a Development Agreement to permit a new mixed-use building located at 500 Broadway.

The project involves the construction of a seven-story building, 84 ft. in height, of about 330,344 total square feet, including 25,600 square feet of basement area, 39,600 square feet of ground floor commercial space, 262 residential units, and 577 parking spaces within a four-level subterranean parking garage.

The project site consists of two parcels with a total of 67,500 square feet located on the southeast corner of Broadway and 5th Street, and extending 450 feet in length along the east side of 5th Street, between Broadway and Colorado Ave.

The site is currently developed with a one-story commercial building and surface parking lot, Fred Segal.

“In our planning process in Santa Monica we’ve sometimes had problems with the proper sequencing of carts and horses and I want to make sure we don’t get the horse before the cart here,” Councilman Kevin McKeown stated, before questioning the legitimate reason of moving forward with a project absent of new regulations.

“Shouldn’t the downtown plan inform the project rather than the other way around?” he asked.

City officials suggested Broadway 500 be a test case for the finalizing of the DSP, enabling discussion items such as open space, public facilities, and transport to be debated before being set into regulation.

The Architectural Review Board conceptually reviewed the project on Feb. 3 this year and was supportive of the project’s design and proposed uses.

Overall design discussions between DK Broadway and the city design team will continue based on the comments provided from the Planning Commission and further direction from the City Council pertaining to the project’s design, scale, pedestrian orientation, and streetscape design.

One of the major issues raised at council was the inclusion of a supermarket in the complex to alleviate local traffic congestion new residents and tenants.

Mayor Pam O’Connor acknowledged the influence of Millennials in the planning decision and their desire to have everything nearby.

“The grocery market I think is a very important component,” Mayor O’Connor said. “It will help to energize and activate the street level and it will be a service to the neighborhood.”

The Mayor also raised the possibility of including slow-speed vehicles in the plan and questioned the specific use allocation of open space.

The issue of ground floor design, consistency with LUCE policies to enhance the quality of the streetscape and create an open space environment that encourages pedestrian activity and interaction and the extent to which consistency with the draft DSP standards should be considered and will also be reviewed alongside community benefits of the project.

Affordable housing, on- and off-site will also be discussed, with a range of options considered.