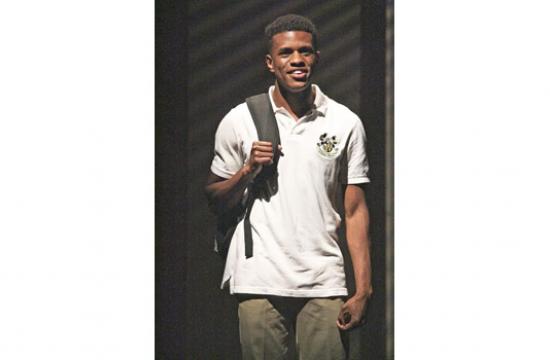 Any time a production comes to down that originated at New York’s Alliance Theatre or the Manhattan Theatre Club, you almost automatically know that it’s a play that deserves your attention. And, so it goes with Tarell Alvin McCraney’s “Choir Boy,” a play punctuated with haunting gospel music performed by a very talented group of five African-American actors, two of whom were in the original New York production – Jeremy Pope and Nicholas L. Ashe who reprise their roles of Pharus Jonathan Young and Junior Davis, respectively.

Although impeccably directed by Trip Cullman, this is not a perfect script as there are gaping holes in the narrative, with contradictory revelations. That said, despite some of those weaknesses, it is still a compelling evening of theatre due, in large part, to the angelic voices, choice of musical material, and sometimes-heartbreaking circumstances.

The story takes place at the Charles R. Drew Prep School for Boys, which has very specific traditions regarding one’s behavior and a strong code of conduct.   At rise, the spotlight is on a clearly effete Pharus, brilliantly played by Jeremy Pope, who dives deeply into his role and systematically peals away each layer of his complex character. It is graduation time and being both choirmaster and the best singer in the coveted, elite choir, he is singing the school’s anthem in the middle of which he pauses as a gay insult is hurled at him from one of the unseen students in attendance.

Following his dramatic pause in singing, he is scolded by Headmaster Marrow, well played by Michael A. Shepperd, who wants this student to reveal the reason he stopped singing. Being very bright and somewhat cagey, Pharus cites chapter and verse the time-honored rules by which students at this prestigious prep school must live by and refuses to rat out a fellow student, even risking the scholarship that afforded him a place in this school. Marrow walks a tight rope between trying to do what’s best for his students and at the same time, has to please his Board of Directors. He pretends he does not know that Pharus is gay, but at one point admonishes him to straighten out his wrist.

Being the head of the choir, Pharus has some clear options on how to get back at the student who hurled that remark at him and is convinced it came from the hostile Bobby Marrow, the arrogant headmaster’s nephew and one of the few students at the school who is not there on a scholarship. Exercising his power over who gets to sing in the choir, Pharus informs Bobby that he is no longer part of the group. Donovan Mitchell gives a wonderful performance as the seething, homophobic Bobby who seems to always be angry with Pharus, whose very presence sets him off.

Pharus never discusses his obvious homosexuality openly with the other members of the choir but one night opens up to his sympathetic roommate, AJ, who is the only student who would room with him.   In this very poignant scene, Pharus reveals a painful childhood memory about getting a haircut in a barbershop where people made fun of him. He never went back to that barbershop. This touches AJ, skillfully played by a most imposing Grantham Coleman, who invites him to sleep in his bed, not in a sexual way, but in an “I feel your pain,” kind of a way.

Pharus does not try to change his physical mannerisms in any way, including a very funny scene in the shower where he wraps a towel around himself, much the way a woman would, puts on a feminine shower cap, and minces off to take a shower. In another shower scene with a totally different tone, Pharus misreads a sign from one of the unseen choir members and thinks he’s being invited in but instead is beaten and thrown out of the shower. Eventually, one of the boys confesses that he was the one who beat him up and reveals a painful secret.

The glue that keeps tying the story together, as well as driving the action forward, is the haunting musical score of predominantly old Gospel songs around which there are many discussions by the choir members as to the real meaning of the lyrics. Some members think there is a hidden meaning that gave escape routes to the slaves and that their masters would not get the obtuse messages while others heartily disagreed. The haunting music, as sung by these most professional actors who sing or singers who act, grace the stage with a heavenly sound that could be described as goose-bump time, with “Motherless Child,” particularly wrenching. (A list of the songs is at the end of this review.)

With the 50th anniversary of the school coming up, and the ongoing disagreements in the choir, Headmaster Marrow decides to bring in a white teacher named Mr. Pendleton, well played Leonard Kelly-Young, to give a class on creative thinking. On being late to his first class, he makes a crack that black people aren’t the only ones who run on CPT or Colored People’s Time. Of course, it lands like a ton of bricks and his effort to ingratiate himself doesn’t immediately work. The headmaster also decides to make Pendleton choirmaster but given the apparent fact that he has no musical background, that plot point makes no logical sense.

In one particularly touching scene, on a darkened stage, Pharus is illuminated in a spotlight and is having a conversation with his mother, who we understand from his reaction, tells him that she’s not coming to graduation. He is understanding and tells her it’s ok and yet, in a later scene with his roommate AJ, he tells him that his mother did show up but would not make eye contact. The script definitely needed a narrative transitional point to clarify that contradiction.

The other very gifted member of this sterling cast is David Heard as Caleb, a man who has dreams of joining the clergy but has severe personal conflicts that drive him to want to leave the most prestigious Charles R. Drew Prep School for Boys.

Production values are spot on beginning with the excellent Scenic Design by David Zinn, which transforms the set from classroom and choir room, to shower and Pharus’ dorm room. The seamless transitions between scenes are beautifully aided by Musical Director and Vocal Arranger Jason Michael Webb’s score, with the entire production beautifully enhanced by Peter Kaczorowski Lighting Design, and E.B. Brooks’ Costume Design.

Not to be repetitive, but despite some writing flaws and some of the characters not being sufficiently fleshed out in Mr. McCraney’s script, he does give director Cullman’s superb ensemble a vehicle in which to explore some important ideas around their individual character’s sexuality and the historic meaning of their inherited musical legacy.

“Keep Your Eyes on the Prize”  – The Choir

“I Couldn’t Hear Nobody Pray” – The Choir

“Keep Your Eyes on the Prize” – The Choir

“There is a Fountain Filled with Blood” – Nicholas L. Ashe & The Choir

“I Been in the Storm So Long” – Michael A. Shepperd & The Choir

“I Got a Rainbow Tied ‘Round My Shoulder – The Choir

The Gil Cates Theatre at the Geffen Playhouse