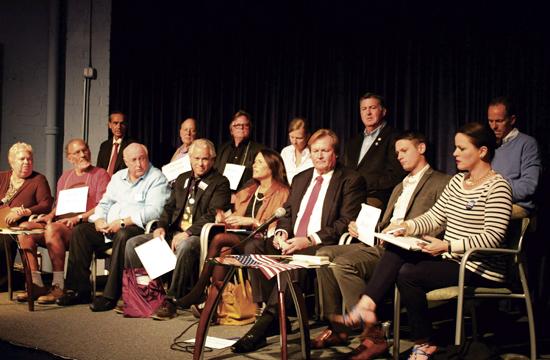 All candidates running in the Santa Monica City Council on Nov. 4 took to the Cross Campus stage Tuesday night at Mirror Media Group’s forum. The 14 candidates are running for three seats on the council.

Two are incumbents – Kevin McKeown and Pam O’Connor. The other seat is open with the retirement of concilman Bob Holbrock.

The evening, co-sponsored by the Santa Monica Chamber of Commerce, provided residents the chance to hear from all candidates in the lead-up to the election.

Mirror editor-in-chief Brenton Garen moderated the forum, which was split into group and lightning rounds of questions. The forum concluded with one-minute candidate statements. The order was randomly selected at the event.

“For many years I’ve been a leader of the pro-resident faction on out city council, so I am running on my record.

“I want to talk about technology… I helped write the plan that resulted in our putting dark fiber into every trench we dug in the city of Santa Monica, so that now we have the network, CityNet that provides 100 gigabits… for businesses in this town… That’s the sort of leadership… of innovation… of future thinking that I will continue to do on the City Council.”

“My vision of the city is a vision that’s driven by what people’s form and function, and their minds, can produce. What sort of creativity can grow out of the minds of the people who live here.

“To have a creative future, that means that you have to control the development, you need to think about putting residents first, you need to turn the city a deep green as fast as you can.

“For these issues I bring a very compelling record as a planning commissioner.”

“I am trying to build a bridge between our generations and really take the reigns, to create community ownership for the new generation to connect with those who came before us so that we can move Santa Monica forward, we can build a better tomorrow.

“I really want to work with everyone here to make a better tomorrow and make sure Santa Monica stays a livable city that we [young people] can afford to stay in and raise families.”

“I believe our city is at a tipping point…that we are on the verge of becoming the playground of the point one percent and not the wonderful town with great services, great schools and a real family fabric that was here before.

“I think that new business is fantastic… but Santa Monica will lose its meaning if we are no longer a town that has progressive values… I want to hear what you have to say and make that happen in Santa Monica.”

“I want a sustainable future for our exceptional city… I want a future for Santa Monica that brings in and ushers in new transportation options.

“I work hard to protect neighborhoods, to protect renters rights. I stand for good jobs and good wages. I stand for excellent public schools. I want us to continue to be a community that is sustainable, that is inclusive, that is a place where our children can grow, thrive, learn and become great citizens, great participants of our community and as those of us who age, we have a wonderful life supported by the wonderful energy of the new generation.”

“I am a very positive, creative, big picture, solutions-oriented, common sense person. I think that we can evolve as we talk about development, I think that we can keep our beach-front character as a community and still evolve with the changing times.

“And that happens if you really sit and listen to everybody and try to integrate that and that’s how I governed when I was in office before.”

“I have a lifetime of experience and a lifetime of volunteering in Santa Monica. I am a native of this city. I’m concerned that when your children and your grandchildren grow up that when they look behind a palm tree in Santa Monica, they will see the sky behind it, not an office building… that we wont be stuck in traffic all the time.

“I’ve grown up here… I know the airport inside and out. I tell you, we’ve got to save that airport. The airport’s real important.

“This is such a great community, we all have to want to get to know one another… there used to be a time when you were a kid, when you could walk down the street and moms talked to moms and dads talked to dads, and everybody knew everybody, but we don’t have that anymore.”

“I have a multi-generational perspective on Santa Monica, I live on Ocean Park, I work downtown…my 93-year-old dad lives in an apartment on 6th street… my 24-year-old son is currently living at home going to graduate school at UCLA and through his cohort I see all the issues that young Millennials have in dealing with Santa Monica.

“I think I have a good perspective of what goes on in Santa Monica…a very balanced perspective.”

“I’m a hard worker, I get things done and I’m a tireless worker…I understand tourism…because Puerto Rico’s number one industry is tourism and my sister worked for two hotels.

“When you vote for me you’re voting for someone who has extensive experience, not only in the private sector, but in the public sector…and who understands development and tourism.”

“I have an 11-year-old son and I’m worried about the kind of world that he is going to grow up in.

“One issue that hasn’t been touched on tonight is the issue of public art and art. It’s become a sustainable city goal and that’s positive. We’re working now to save this beautiful environmentally-friendly Muir Woods Mural, we worked for two years to save Paul Conrad’s “Chain Reaction”… I think that the support for public art is really important.”

“Do we like what our city looks like now, that they [fellow candidates] have been here and the decisions that they’ve made?

“The idea is we need fresh thoughts we need to have a balanced budget. We need to stop the millions of dollars that are going out of our city…and we need to reassess the education that our kids are getting.”

“I’m the only candidate running who has spent the past four years studying the issues that are faced in our community on the Planning Commission and serving our community as an elected member of the Rent Control Board before that for eight years.

“I spend my time between meetings working with elected officials and local leaders on making real positive change in Santa Monica, protecting renters’ rights, preserving our residential neighborhoods, and continuing the tradition of arts and innovation in Santa Monica.”