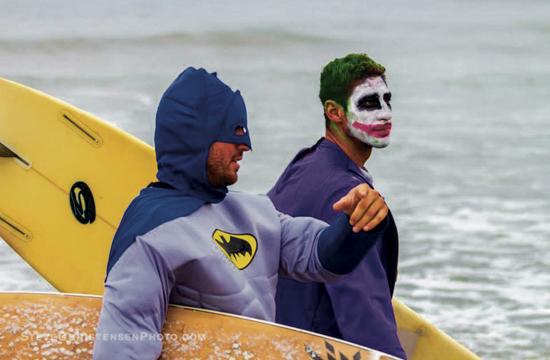 For an entertaining way to combine the spirit of Halloween and the quintessential SoCal lifestyle, look no further than ZJ Boarding House’s annual Haunted Heats Halloween Surf Contest this Saturday, Oct. 25 at 8 am. Far from the ordinary surf competition, the participants will be riding the waves of the Pacific Ocean all the while donning their Halloween costumes.

Set to take place near Tower 26 on Santa Monica Beach, the competition is in its seventh year running and attracts an impressive number of both surfers and spectators alike.

“This year, we’re expected to have about 60-70 contestants,” Teddy Vecchione, ZJ Boarding House’s Art and Marketing Director, said. “I’m guessing around 150 people will come to watch.”

The competition is welcome to all ages and all skill levels and is complete with a judging panel. However, the focus of the event is not necessarily on the technicalities of the sport. Rather than a serious surf competition, the emphasis lies in the creative abilities of the contestants.

“We’re more focused on the fun,” Vecchione said. “If someone in a ballerina costume is on a surfboard and strikes a ballet pose, that’s sure to get more points [than the average competitor] because they’re taking the role of their costume. It’s necessary to have some skill, of course, but as long as you can catch a wave in your costume, we try to keep [the judging] pretty arbitrary and focus more on the creativity.”

Naturally, the local surfers have brought the best of their creative juices to the competition, with stand-out costumes speckling the waves each year.

“One time, some contestants dressed up as all four of the Teletubbies,” Vecchione recalled with a laugh. “They all surfed on one board together, too. It was pretty impressive.”

Last year’s surf contest winner, the “ultimate warrior,” earned his crown by thinking outside of the box – or rather inside of it – by incorporating a “wrestling rink” onto his surfboard.

“We’ve had Grim Reapers, Baywatch girls, and even a Chia Man, which is essentially a fully grown, human version of a Chia Pet,” Vecchione described.

The same caliber of clever and innovative costumes is likely to be present this year.

“It’s basically a big party,” Vecchione said. “We like to think of [this event] as the best Halloween surf contest west of the Mississippi.”

The surf contest also supports a worthy cause, featuring food and prizes. There will be a raffle for a Firewire 6’2’’ Timber Tek Dominator surfboard, with the proceeds benefiting Boarding for Breast Cancer (B4BC), a youth-focused breast cancer education and prevention foundation. The non-profit organization seeks to promote early detection of the cancer as well as a healthy, active lifestyle, with the latter aspect aligning with the sports-based nature of ZJ’s Boarding House.

ZJ’s Boarding House is owned by Mikke Pierson and Todd Roberts and is located at 2619 Main St.