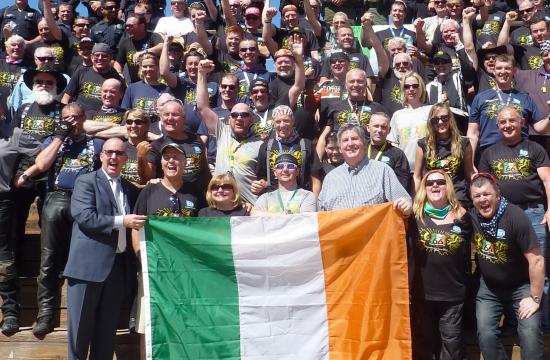 A jubilant group of Irish charity motorcyclists arrived Thursday at the end of their fundraising run across America, welcomed to the Santa Monica Pier by Santa Monica Councilman Kevin McKeown, himself a dual citizen of the U.S. and the Irish Republic.

The group had begun on Sept. 21 in Chicago, tracing every mile of the historic U.S. “mother road” to their climactic arrival through the Santa Monica Pier sign and down to the Pier deck and the Pacific Ocean below.

Temple Street Children’s University Hospital, founded in 1872, is an acute pediatric hospital serving some of Ireland’s sickest children and providing a referral and care service on both a regional and national basis.

The organizer of the biannual motorcycle ride, Angela McNulty, said “Always on a 66er’s mind are the brave little patients in Temple Street that urgently need the best possible care that can be given to them.”

McKeown welcomed this group of Irish challenge fundraisers to Santa Monica and the end of their journey on the Pier.

”Your commitment and dedication are inspiring, and I’m happy to welcome you to Santa Monica, where you’ve earned some party time to celebrate your accomplishment,” McKeown said.

Since 2002, this motorcycle challenge has accumulated 750,000 pledged miles to support the Dublin children’s hospital. This year’s contingent included more than 60 motorcycles, which had traveled through nine states and four time zones to arrive in Santa Monica.