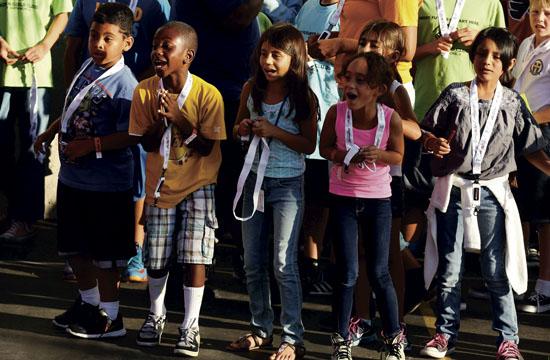 Children at the Santa Monica Boys & Girls Club were treated to a revved-up afternoon last week with an Xbox extravaganza that included hot Lamborghinis, racecar-drivers, and games galore.

“The event was designed to foster youth creativity and car passion,” according to the organizers. It was “the first event of its kind for three of the world’s most iconic and recognizable consumer brands.”

Three lucky winners were chosen and their designs were unveiled at the event and will be brought to life in “Forza Horizon 2”.

“Hundreds of kids submitted awesome designs for the contest and we’re actually going to be re-creating those in-game,” explained Dan Greenawalt, Turn 10 Creative Director. “Their drawings will become a reality in the game.”

The winning designs will be available to all “Forza Horizon 2” owners as free downloadable liveries in the future.

“The winners are going to feel confident like…‘I took a design, I used my skills, and now I’m inside a video game. I learned something,’” Campbell said. “The gentlemen from Lamborghini were teaching the kids a lesson on how Lamborghini started out making tractors, that gentleman who made that tractor followed his dreams, he never probably imagined that there’d be Lamborghini in a Boys & Girls club.”

“[This event] brings the message home that if you follow your dreams, anything is possible.”

After the formal presentations and the boys and girls enjoying a massive indoor Hot Wheels playground, a parade of flashy Lamborghinis arrived and delivered Hot Wheels toys Santa Claus-style to the kids.

“Just seeing the kids walk up and seeing the cars outside and the slew of questions that ensued was just unforgettable,” Campbell said. “When you come into the Boys & Girls club we really try to work on…giving the kids a sense of belonging, a sense of usefulness. The Forza team came in and gave us the opportunity.”

“It was an exciting moment,” said Jason Chinnock, Automobili Lamborghini America General Manager. “I saw their eyes light up, especially when they heard the roar of the engine.”

With the rise of ride-sharing services, smartphones and other technologies, young people are driving less than ever, event organizers explained, with the days when kids tacked their favorite supercar onto a wall, quickly fading away.

During the event, the kids got a chance to play “Forza Horizon 2” and see how the winning designs will be featured in the game.