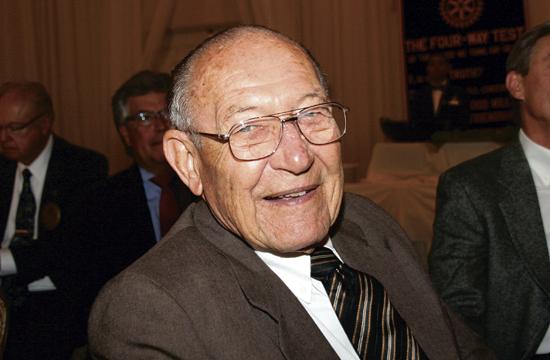 As a man deeply revered in both the professional and personal realms of the Santa Monica community, John Bohn passed away on Saturday, Oct. 11. He was 93.

“When one considers all that he did in his lifetime, iconic is not too large a word to use,” Michael Gruning of Pence Hathorn Silver Realty said. “From Santa Monica City Councilmember to Chairman of the Board of the Chamber to his work with the Rotary […] he was a man who was constantly giving back to the community.”

Bohn’s long-held dedication to the city of Santa Monica is strongly rooted, as he moved to the community in 1936 with his family.

His pro-activity and positive energy dates back to before his teenage years, as he started his first business at the tender age of 12 as a distributor for a publication in his Illinois hometown.

At age 16, Bohn built his second business in Santa Monica as the operator of a Christmas tree lot on the still-bustling corner of 3rd and Wilshire.

Bohn attended UCLA after graduating from Santa Monica High School, not only demonstrating his standards of education but also maintaining the same powerful work ethic, as he helped pay for his tuition by operating a floral business and selling flower arrangements to campus organizations.

During one of his college summers, Bohn worked for the Douglas Aircraft Company’s engineering department, where his ability allowed him to be involved in prestigious projects, including staffing at a top-secret plane manufacturing plant during World War II. Bohn joined the Merchant Marine during the last year of WWII and served for years afterward.

Bohn went on to continue in a similar field of interest, all the while adding on to his successful business practices.

“He was a respected business leader for 70 years in Santa Monica,” Rotarian Iao Katagiri of RAND Corporation described.

Bohn took an unconventional route that was telling of his level of diligence: in order to finance Tavco, Inc., he formed yet another company, Bradmore Investment, a factoring and commercial company.

Ultimately Bohn decided to concentrate on strengthening the finance business: Tavco was converted into a finance company, renamed Acceptors Inc., and started to purchase properties in the Los Angeles area. The fruits of his labor resulted in real estate representing 85 percent of Acceptors’ investments.

Bohn was the president of Bohn Bros Moultrie Inc. and Equity Associates Inc., which collectively own and manage over a million square feet of industrial and commercial property in California. The potency of his roots is apparent, as nearly all of the companies’ partners and investors are or were originally from the Santa Monica area.

Bohn graced the Santa Monica community by contributing the same amount of conscientiousness and hard work toward giving back to the city.

“I would affectionately describe him as a giant in this community for his philanthropy, his ‘give-back’ philosophy,” Nat Trives, former mayor of Santa Monica, said. “He was a quiet force that made good things happen. He was a mentor, a counselor, and a dear friend.”

Bohn and Trives worked together on the Rotary Foundation Board and both served on the Santa Monica City Council.

Although “Bohn was someone far more than the positions he held,” he “gave his heart” to the city through the commendable amount of community leadership he participated in.

“He was a respected, loved man with great integrity, who had a kind word for everybody,” Laurel Rosen, President/CEO of the Santa Monica Chamber of Commerce, said. “I was honored to serve on his Board when he was chair. He was a friend to me and to the team at the Chamber; he was a great supporter and mentor. We considered him family.”

As a close colleague who knew Bohn on both a professional and personal level, Rosen was able to elaborate on his character and share her sentiments.

“He had a real joy of living and shared that with the people around him,” Rosen said. “He was the go-to-person for many, many people, and will be missed terribly by the community. He led a grand, wonderful life filled with great stories, and is truly someone who can look back on his life and be very proud of it.”