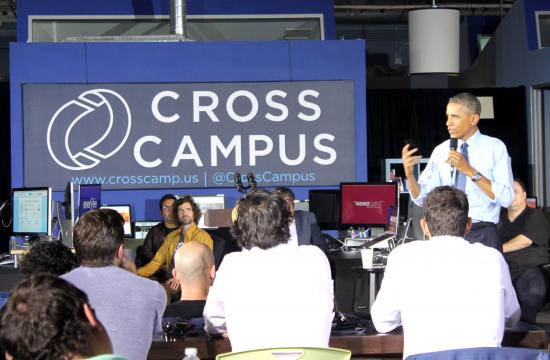 President Barack Obama toured Cross Campus, a shared workspace campus in Santa Monica, on Thursday afternoon shortly after 2:45 pm and hailed the so-called “millennial” generation as a driving force in rebuilding the nation’s economy, and one that will change the face of the business world.

“I know that there’s a few of us here who are only young at heart, but a lot of you are part of the millennial generation that’s going to change how we do things,” Obama said after touring Cross Campus on Colorado Avenue and meeting with workers at the shared office space.

“Today more of our young people are earning a college degree than ever before,” he said. “More and more children of low-income parents are enrolling in college and earning their shot at the American Dream. Along with higher education levels, millennials have a lower gender pay gap than other generations, and we’re working to close that gap even further. And what we’re seeing here is the way that technology is changing not just how you do business, not just how you buy products, but also how you interact, how you organize politically, how you get involved in the community and how you solve problems.

“And all of that can support millions of new jobs. So in some ways entrepreneurship is in the DNA of this generation,” Obama said.

Obama took part in a Q&A discussion at Cross Campus, which is a collaborative space that brings together freelancers, creative professionals, entrepreneurs, and startup teams funded by venture capitalists.

The president’s visit coincided with the release of a report by the President’s Council of Economic Advisors on millennials, the group born between 1980 and the mid-2000s, the nation’s largest generation, representing one-third of the population.

At Cross Campus, Obama hailed millennials as “a rising generation of talented, striving, innovative, young people.” He said the impact of millennials is being felt not just in California, but across the country.

“A lot of you entered into the workforce during the worst financial crisis and then the worse recession since the great depression,” Obama said. “And a lot of cynics have said, well that makes many of you part of a lost generation. But I don’t buy that because when I travel around the country I see the kind of energy and hope and determination that so many of you are displaying here.”

Later today, Obama is scheduled to visit the Brentwood home of actress Gwyneth Paltrow for a reception and dinner benefiting the Democratic National Committee. Tickets are priced from $1,000 to $32,400, the maximum allowable contribution to a national party committee in a calendar year, according to the website, PoliticalPartyTime.org, which tracks political fundraisers.

The fundraiser will be Obama’s 30th in Los Angeles County as president.

Bill Clinton conducted 36 and George W. Bush and Ronald Reagan eight each through the sixth years of their administrations, according to research by Brendan J. Doherty, an associate professor in the Department of Political Science at the U.S. Naval Academy, for his book “The Rise of the President’s Permanent Campaign.”

Coincidentally, one of Obama’s top political adversaries is also scheduled to be in the Southland for a fundraiser today. House Speaker John Boehner, R-Ohio, is set to headline an evening fundraiser in Irvine for the Republican Party of Orange County.

The president will take part in another Democratic National Committee fundraiser Friday, speaking at a $15,000-per-person roundtable discussion at the home of restaurateur Michael Chow, according to Variety.

Obama will then visit Frank G. Bonelli Regional Park in San Dimas to announce an executive order declaring 346,000 acres of land in the San Gabriel Mountains northeast of Los Angeles as a national monument.

He is scheduled to leave Los Angeles at 2:20 pm Friday, bound for San Francisco.