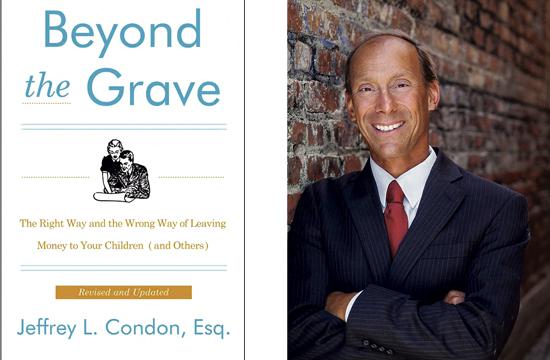 Beyond the Grave, by author, Santa Monica native and attorney Jeffrey Condon of Condon and Condon, lays out tips for making wills and living trusts, as well as telling stories about what happens when money is divided up between surviving relatives.

The book talks about and provides solutions for potential problems ranging from family politics to legal issues associated with the process of leaving a living trust or will. There are many issues that can arise, such as family infighting, fees, taxes, and people who do not wish to comply with the wishes of the diseased. The book covers all of that.

“These tales are cautionary tales from which readers can learn from so as not to do the same things,” said Condon. “As my dad was fond of saying, ‘95 percent of the solution to any problem is recognizing problems in the first place.’”

Condon’s father, Gerald M. Condon, started the law firm with son, F. Milton Condon in 1960. He has been working with the firm his entire working life. He started as an intern and then became a partner after law school.

Over the years, his father collected stories and recorded them. He asked Santa Monican to turn the stories into a book, and so he did.

The first edition of the book was  published in 1995. As time went by, more stories have been added and laws have changed. Condon came out with a revised edition in 2001 and a revised second edition this year.

The main purpose of the book is to make the process of transferring inheritance as simple and smooth as possible. Throughout Condon’s professional career, he came to realize that the process of appointing individuals to carry out the deceased’s wishes, or “successor trustees” and dividing up the estate caused relationships between the surviving members to sour.

“What we found after clients died, is that this issue of appointing just one child as the boss after death instead of all the children as co-bosses is the fastest way to break up a family,” said the author. “Because when you appoint one child the boss over the other kids, you are creating an atmosphere of suspicion.”

Since the successor trustee has full control of how to divide and sell the assets, other siblings may get jealous and feel inadequate, on top of the grief of losing a loved one.

Condon’s book not only tries to benefit his clients, but the community as a whole. “I can’t imagine living anywhere else,” he said.

He was a coach at Santa Monica Girl’s Fastpitch where both of his daughters played. After his daughters left, he continued to coach for the past few years because he loved doing it.

Condon is also a supporter of the Santa Monica Education Foundation. He enjoys the opportunity to have money go to local schools, as he went to grade school and community college in Santa Monica, as well as UCLA for his bachelor’s degree and Whittier College for his law degree.

As a child growing up, he would spend his free time by station 8 and now goes to station 26 with his kids. He also swims ocean races, the latest one being from Hermosa Beach Pier to Manhattan Beach Pear. He swims 3,000 meters every day, and believes that “Breaking Bad” is the greatest show ever made.

Condon’s office can be found at 3435 Ocean Park Blvd., Suite 108, Santa Monica. For more information or to purchase the book, visit www.condonandcondon.net.