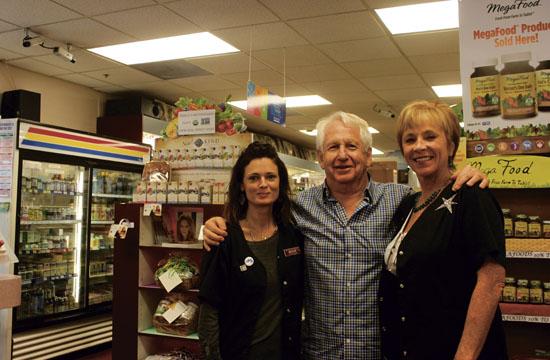 Opening its doors in 1944, Santa Monica Homeopathic Pharmacy continues to thrive, putting service and staff at the forefront of their enterprise, and setting the stage for small-business success in the city.

For the past 70 years, the Litvak family has owned and operated the bustling, brightly-lit pharmacy that was originally located on Fourth Street and Broadway and called the Santa Monica Drug Company.

“Knowledge, care, integrity, and service,” is the secret to the business’ continuing success explained Bob Litvak, owner and operator of the pharmacy and son of original owners Norman and Mary Litvak.

“The other reality of it is, and maybe it’s because our parents put integrity before income and people before profits, we spend 30 percent of our income on salaries. The industry averages 13 percent or less.”

Now situated at 629 Broadway on the corner of Seventh Street, the pharmacy feels like breath of fresh air and boasts homeopaths, nutritionists, Chinese herbalists, pharmacists, and a slew of advisors.

“If you walk in here at any given time, we will have five to seven consultants on the floor,” Litvak explained. “We’re here to take care of people. It feels good, it’s very rewarding, and somehow we’re still here 70 years after the doors opened and I was playing out the front of the store as a four-year-old.”

“I love it!,” Scott exclaimed. “I love everything about it. I love helping people, I love the staff, the owners… It’s about helping somebody and really spending that time with somebody. When someone comes in not feeling well and they walk out of here feeling great and come back – What more can you ask? Seriously!”

Taking a holistic view to service, the pharmacy is stocked topped-to-bottom, an all-encompassing approach that, while relying on a strong local customer base, sees some clients travel from afar.

“We’ve had people fly in from Europe on a regular basis and fly in from Japan on a regular basis, to stock up for a year,” Litvak explained. “In Europe, apparently they have to go to the doctor to get certain things that they can come in here and buy off the shelves – so people come a long way.”

The business is the oldest family owned pharmacy in California, according to Litvak’s research and has long been at the forefront of health and innovation.

Originally, in 1944, the store was just like other pharmacies selling alcohol, tobacco, and filling prescriptions, according to Litvak.

“The pharmacy did have some homeopathic remedies which set it apart and made it unique,” he said.

“In the 1960s, my father removed tobacco from the store,” he explained, a bold move in those times, according to his assessment. “Before that, in 1951, liquor and narcotics were removed.”

“Doctors were giving the soldiers amphetamines in the morning to wake them up and get them out and barbiturates to put them to sleep,” he said. “Learning that a regular customer had died my father told the County to find someone else to help them, refusing to continue this association. A sign went up in the window: “No Hard Drugs’”.”

The health haven has a long list of celebrity customers from over the years, including Mel Gibson, Whoopie Goldberg, Goldie Hawn, Oscar winners, Tony winners, Emmy winners and Olympic athletes, many of whose pictures hang on the walls.

“I tell people I’m very selfish,” Litvak concluded. “I wouldn’t do this if it didn’t feel so good. It’s very rewarding.”

Santa Monica Homeopathic Pharmacy is located at 629 Broadway, Santa Monica, on corner of 7th and Broadway. For more information, call 310.395.1131 or visit www.smhomeopathic.com.