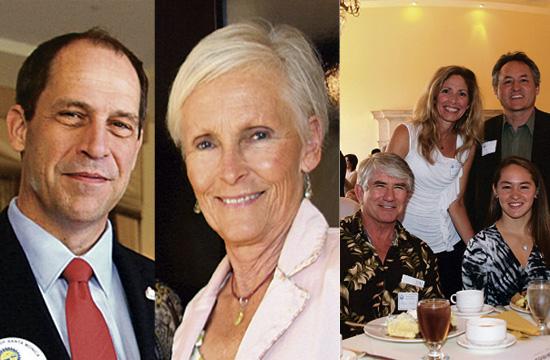 The Santa Monica Rotary Club meeting stood as a testament to some of the strong, influential relationships that are maintained through the organization, what with the bulk of last Friday’s Oct. 24 meeting dedicated to celebrating the life of John Bohn, who passed away on Oct. 11.

The order of events commenced with Pat Bofird leading the club in its usual introductory songs as Matt Lehman and Connie Maguire warmly welcomed their fellow Rotarians.

The tribute to John Bohn was led by his sons David and Paul Bohn and included a picture slideshow.

Present for John’s dedication were the wives of his sons as well as his grandchildren. The team at the Bradmore Group was also in attendance to honor the life of their former president/CEO.

The meeting also hosted special guest and scholarship recipient Maddy Tung, a Santa Monica High School senior and a national women’s wrestling champion who was awarded the Rotary Club’s Citizenship award as an eighth-grader. Her parents as well as her high school wrestling coach accompanied her as she spoke to the Club and revealed that she was applying to the U.S. Air Force Academy.

As the conclusion of the weekly meeting, Laura Avery, Santa Monica Farmers Market Supervisor and Wednesday Farmers Market Manager, served as the guest speaker. According to Rotarian Jillan Alexander, Avery “focused on the value gained by both the family owned-farms and consumers through the Farmers Markets.”

Avery also said that there are approximately 800 weekly Farmers Markets in Los Angeles County alone, which is telling of the popularity of locally and freshly grown products. She has presided over the Farmers Market program in the city since 1982 and has overseen its growth to a tri-weekly, four-market organization. Avery develops a weekly Farmers Market report on KCRW’s “Good Food” segment on 89.9 FM.