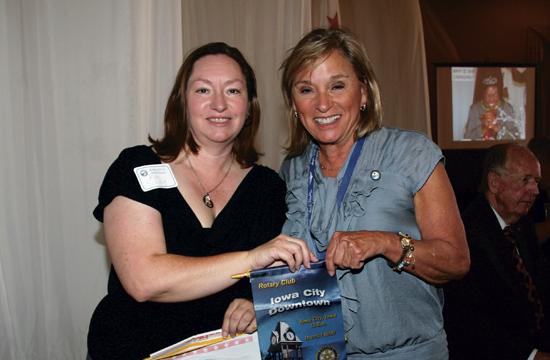 The Rotary Club of Santa Monica received a worldly experience of sorts this past Friday, Sep. 26., with visiting Rotarians from across time and distance, as well as a guest presentation from a historically and internationally knowledgeable sommelier.

First, the meeting kicked off with the melodies of “America the Beautiful” and “Joy to the World” livening the atmosphere with song leaders Matt Williams and Ken Waltzer at the microphone. The invocation was led by Michael Cates, who made time to pay special tribute to and reflect on the services of the nation’s soldiers and veterans.

Visiting Rotarians from around the globe graced the Santa Monica branch with their presence, including Sumaya Casteel from the Macae Cavalieros Club in Brazil as well as Robert Stambouli, the former president of the Rotary Club in Nicosia, Cyprus. Kim Schillig also traveled quite a ways from the Downtown Iowa City Club. Bob Rudd, a seasoned Rotarian and former member of the Santa Monica Club, paid a visit as well.

Matthew Washton, sommelier at FIG Restaurant in Santa Monica, served as guest speaker of the meeting. As a wine expert, there were some fitting treats available for the Rotarians: the club members had the chance to enjoy some quality wine tastings in accordance with Washton’s presentation.

Washton commenced his talk on wine in a sensible, chronological way: with its general history.

“Wine is one of those things that is very personable and very indulgent,” Washton said. “It’s one thing that has brought our society together. Wine has been very much part of our civilization since its founding.”

Washton continued on to explain one of his main points: the progression of wine throughout the ages throughout the world in various nations and civilizations. As the ancient Romans conquered the Greeks “and [took] wine to a whole new level… Old World wine” was conceptualized, as wine was an integral part of the Roman lifestyle.

Washton then transitioned from the ancient years, as he elaborated on how the French people developed the modern era of wine and how the American people gradually strayed away from traditional rules and regulations.

“The French have been controlling wine […] since the early 1400s […] but in America we don’t like to be told what to do,” Washton joked. “[The Americans] wanted their wine to be an industry [of its own].”

The transformation of the Napa Valley in the 1960s led to an “announcement to the world” that “Californian wine had come on board” during a wine competition in the 70s.

A simple and useful way to understand the major difference between “Old World” wine and “New World” wine is to think about the practical purposes of both French wine and American wine, as the wines reflect the cuisine of their respective culture.

“French restaurants cook with a lot of butter,” Washton said. “Their food has high-fat content, so it makes sense to pair it with highly acidic wine to cut through that fat.”

Therefore, the Old World wines tend to be higher in acidity and lower in alcohol; the conditions are reversed in the New World’s case.

“Our [Californian] wines tend to come from a hotter region,” Washton said. “With heat comes sugar content, and with sugar content comes alcohol.”

The more “fruit-forward wine” produced in the Napa Valley completes the typical Californian diet that usually consists of softer, more subtle tastes. All in all, the wines are made very purposefully according to their region and tend to compliment the food of their surroundings. Whether this is the cause of the growing popularity of wine, there is no question that the prevalence of wine has risen in recent years.

“We have a reached a time and place in the world where wine is prolific,” Washton said. “In the last few years wine sales have outsold beer sales, which is unheard in the history of alcohol.”

Not only was Washton’s presentation able to provide interesting information about the world of wine, his speech was especially relevant as his representative restaurant, FIG, is set as the caterer for the Santa Monica Rotary Club’s upcoming wine festival on Oct. 19.