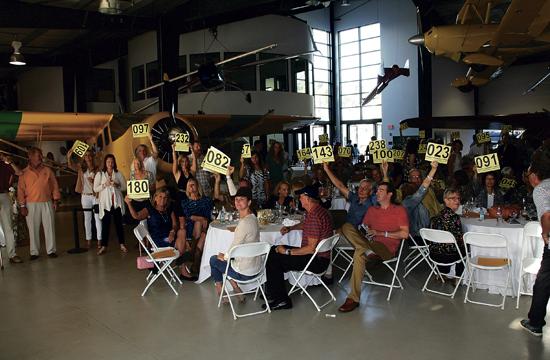 The Santa Monica Rotary Club’s biggest fundraiser of the year, the annual Wine and Jazz Festival, was held Sunday, Oct. 19 at the Museum of Flying. The funds raised from the event help largely finance the Rotary Club’s philanthropic and charitable projects, such as local and international service missions and trips.

“The Museum of Flying was the perfect place to hold the Rotary fundraiser,” Rotarian Iao Katagiri of RAND Corporation said.

The sleek, well-lit, and expansive venue was decked out in awe-inducing pieces of aircraft, as usual. Inside, the attendees mingled, listened to live jazz music, tasted wines, and feasted on food provided by Fig of the Fairmont Hotel. Ken Waltzer, who served as the master of ceremonies, was the resident wine expert.

In light of fellow Rotarian John Bohn’s recent passing, there was a special auction held at the event in honor of the long-time member.

“[The auction] attracted many bidders who donated to the Rotary Club of Santa Monica Foundation in honor of [Bohn],” Katagiri said.

Overall, there was more than $50,000 raised at this year’s Wine and Jazz Festival, according to Rotarians Suzan Allbritton and Ken Waltzer. A more accurate amount will be released in the near future.