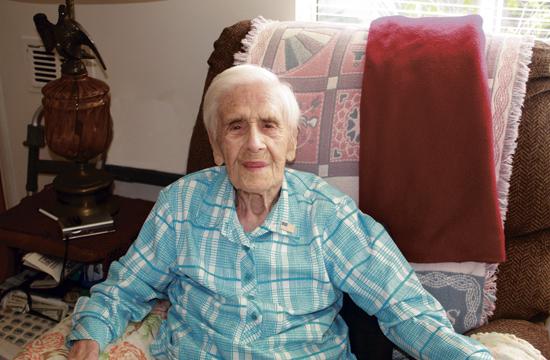 Calling California home for most of her adult life, Davis has lived in Santa Monica for the past 16 years, moving from West Los Angeles where she spent 70 years after relocating with her husband when they got married.

He worked in motion pictures, she was a waitress.

“It was hard back then,” Davis explained. “Everyday he [my husband] would have to get up and go and wait in the labor line to be called. And the pay wasn’t much at all. I was making 25 cents an hour, and I didn’t believe in tips – I didn’t think it was right to take other people’s money.”

Relaxing in a comfy armchair in her sun-lit corner apartment, Davis explained that apart from technology, she doesn’t think times have really changed all that much.

“Things were really simple then,” Davis said. “Simple foods. We cooked everything ourselves, you didn’t just go out and buy everything.

“We started our day with oatmeal, and ate vegetables and good clean food,” habits that she keeps to this day.

“I still eat a bowl of oatmeal in the morning,” she laughed. “And lots of green vegetables too.”

After suffering two falls at age 105, Davis now relies on her care giver to help her get out and about, but she still does her daily leg exercises, although she should be doing more, according to Davis; eight leg lifts and side legs lifts at least once a day.

Davis also insists on walking around her house and up until two years ago would walk everywhere – for groceries, to pay utilities, and to attend social gatherings and events.

Davis also worked until she was 90 and still attends installations, seminars and events at the nearby Masonic center, although with a little less regularity than in previous years.

“I am getting older!” Davis said, adding that although she has been relatively illness free, and the first time that she went to see a doctor was at 80 years old as she thought she should get a check-up, her body is getting a bit tired.

Not tired enough however to stop her enjoying her favorite ice cream, Neapolitan, with regularity and reading the newspaper and watching a little TV as part of her daily schedule.

Davis also usually attends an annual combined seniors dinner each year and has been crowned the over 90s queen for the past three years in a row.

He was not single however, “No, he has an 80-year-old wife!” Davis laughed.

Last week Davis was out watching President Obama’s motorcade and his arrival at Cross Campus, right by her home.

A Secret Service officer approached her and presented her with a pin “from the President,” she explained.

Wearing the pin with pride, Davis has her doubts that it came directly from President Obama himself, but treasures it none-the-less, keeping up with politics and local happenings on a regular basis.

“I got a hand-written letter from the President at the time when I turned 100,” Davis explained, adding that she is waiting for a letter from President Obama too.

Davis has no major celebrations planned for her 107th birthday, perhaps just her daughter and a few friends may visit.

“I was never really much for birthdays,” Davis said with a shrug. “The last party I had was a surprise party for my 16th birthday, that was a lot of fun back then.”