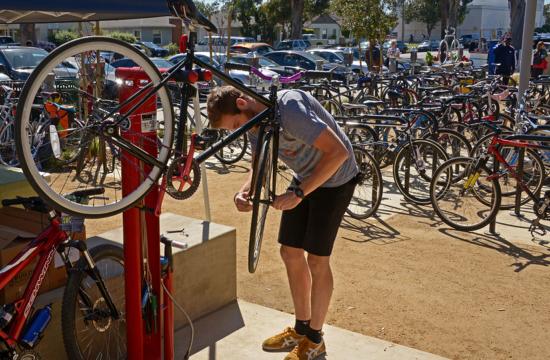 The League of American Bicyclists recognized Santa Monica College for its efforts in making its campus bicycle-friendly with a Bronze-level Bicycle Friendly University (BFU) award.

The award, announced on October 22, makes SMC the first community college in California to get this bike-friendly certification, and it shares the distinction of being the first nationwide with Montgomery County Community College in Pennsylvania. Other universities, which also received a first-time bronze designation, include Pomona College, Columbia University and Carnegie Mellon University.

“Campus leaders are recognizing the real-time and long-term impact that a culture of bicycling can create,” said Andy Clarke, President of the League of American Bicyclists, which leads a movement to make America more bike-friendly. “We applaud this new round of colleges and universities for investing in a more sustainable future for the country and a healthier future for their staff, students and surrounding communities.”

The Bronze-level award recognized SMC’s efforts, through its Center for Urban and Environmental Studies and the student-run SMC Bicycle Club, to build a bike-friendly campus by offering organized rides, a mentoring program for new riders, information to incoming students and new faculty and staff about riding on campus, and bike valet parking at events. It also has a cash incentive program for employees who bike, walk, carpool, or take transit to campus.

The campus currently has 800 bike racks, and in collaboration with the college’s Associated Students, offers an “Any Line, Any Time” service through which students and staff with valid IDs can ride “any line, any time” on the City of Santa Monica’s Big Blue Bus.

“Getting this designation really motivates us,” says Genevieve Bertone, SMC Director of Sustainability. “Our student leaders in the Bike Club led the initiative to apply for this award and we are going to keep up their good work.”

In 2008, SMC joined over 600 colleges and universities in committing to reduce its carbon footprint through the American College and University President’s Climate Commitment. The college is known for its innovative environmental programs such as in recycling and resource management, a commercial composting station, and its wide offerings of sustainability-focused classes.

There are now a total of 100 bicycle-friendly universities in 37 states and Washington D.C.The award designation is good for four years.